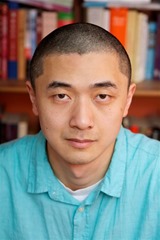 Ken Liu, award-winning author and translator of Liu Cixin’s Hugo-winning novel The Three-Body Problem, has written an interesting essay on the Powell’s blog looking at the changing nature of books. The essay explains the inspiration behind one of the stories in his new debut anthology, The Paper Menagerie and Other Stories.

The story under discussion is called “The Bookmaking Habits of Select Species,” and imagines a number of different alien life forms and their various different relationships with the idea of “books.” None of these species’ “books” is necessarily what we humans would consider a “book” per se, and yet each serves a similar function of recording and revealing knowledge in some way. It’s posted in its entirety on the website of Lightspeed Magazine, and is worth a quick read before reading Liu’s essay.

Like me, Liu got his start reading e-books on a Palm Pilot, then he moved to a Rocket eBook when it became available. He finds it interesting that, with e-books and other electronic reading, we’ve effectively reversed direction in the evolution of the book—going from a codex-style collection of pages back to a scrolling medium.

The problem with physical scrolls, and the reason that the codex represented such an advance, was that you didn’t have random access—you had to unroll the whole thing to read any section of it. By comparison, a codex offered the ability to open to any point in the book and flip back and forth, as well as use both sides of the page.

But the new electronic form of scrolling includes hyperlinks and search functions that enable a new form of random access that’s as different from paper books as paper books’ access was from scrolls before them. They also confer other advantages, such as instantaneous text reformatting, access to supplemental material such as encyclopedias and dictionaries, note-taking, quote-sharing, and so on.

But what Liu finds especially interesting is the way that we continue to try to retrofit book-style authority to this new form of the scroll—requiring citations to include page numbers, and even adding physical page numbers to Kindle e-books so readers could cite them rather than using the Kindle’s more precise “location” marker.

Liu argues that trying to force digital content back into the mold of paper content effectively handicaps it and prevents it from reaching its fullest potential—whereas an e-text that takes full advantage of hyperlinking, multimedia, and the other possibilities could give readers entirely new ways of looking at the text.

The human mind is an associative mind, and it is the book’s ability to facilitate associations — between the author and the reader, between texts (by citations and links), between readers (by marginalia, pencil-underlines, and “popular highlights”), between different ideas — that gives it power. When Vannevar Bush dreamed of the memex, he was imagining the ultimate book, in which all readers were also writers and editors and curators, building trails of association that wove into a meta-textual web over the sum of human knowledge of which our World Wide Web is but a pale imitation.

Who knows what the book of the future will look like?

In that light, Liu’s story about books is especially interesting. It puts me in mind of the Doctor Who episode “Silence in the Library,” in which the Doctor off-handedly discussed all the forms books had taken over the centuries. “51st century. By now you’ve got holovids, direct to brain downloads, fiction mist, but you need the smell. The smell of books, Donna. Deep breath.”

It’s small wonder that we have been so fascinated with the idea of books through the centuries, and will continue to be in centuries to come. What are books, after all, if not crystallized knowledge and imagination? And despite the Doctor’s contention about needing the smell, does it truly matter in what material form that crystallized knowledge is fixed, if it can can readily be recovered again and reused in the same way?