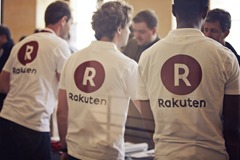 Rakuten, parent company of Kobo and Overdrive, is shuttering its European retail site Rakuten.co.uk as of the end of August, according to reports in TechCrunch and Engadget. Formerly known as Play.com, and rated UK’s favorite retailer in 2009, the site was bought by Rakuten in 2011. Rakuten is also shutting down Rakuten.es in Spain, and closing its offices in Austria and Barcelona.

This isn’t the first Rakuten market to see downsizing. In February, it cut back operations in Brazil and pulled out of Southeast Asia.

The articles don’t mention Kobo or Overdrive, but there is this about Rakuten’s other subsidiaries:

A Rakuten spokesperson confirmed to TechCrunch that the shutdowns will not affect a number of the companies other business interests in Europe, including its Wuaki video platform, messaging app Viber, and Fits.me, a fashion e-commerce firm it acquired last year which has an office of its own in London. (It remains to be seen how Fits.me, which is based in Estonia, will feel about the UK exit since presumably much of its ambition was centered around piggybacking Rakuten’s e-commerce business.)

I would doubt that Kobo will be hit by this restructuring, given that e-book retailing doesn’t have to deal with the warehousing and shipping costs physical goods retail does, and Kobo is a strong international e-book contender. Indeed, Nook’s recent abandonment of the UK e-book market can only make Kobo’s position stronger there. Still, it’s an important reminder that retail can be a chancy business, and market downturns can affect even big corporations.