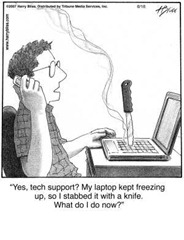 I’ve been learning a lot in my new job as a tech support representative so far. It’s kind of funny—before I took this job, I thought I “knew” what tech support was, from my limited exposure to humorous tech support stories, and my work supporting a small web hosting company. But exposure to everyday people with common computer problems has given me a whole new perspective—or at least the start of one. The biggest thing I’m sure of is that I’ve still got a lot left to learn.

It’s surprising, though perhaps it shouldn’t be, just how many people have exactly the same problems. A large percentage of calls I take relates to inability to set up wireless routers. These complicated, cantankerous devices, and the convoluted way in which they relate to people’s computers, cause a lot of trouble and misunderstandings, not to mention frustration. Small wonder that some companies can charge as much as $100 simply to have someone come out and set up a home network. There have been some times when even I’ve felt like it might be worth it to pay someone that much.

Another frequent stumper is the way Microsoft now bundles a trial version of Microsoft Office with every installation of Windows 7. Except it isn’t really a “trial” version so much as it is a “Schroedinger’s version”—when presented with a product key, it’s the real deal; if not, it’s a trial. It looks exactly the same either way when you start it up; the only difference is that some computers have a card with a serial number bundled with them.

Since it doesn’t look like a trial when you first run it (it says it wants a product key and there’s a little tiny button in the corner saying “Trial”) and the only place it says it is a trial, before purchase, is in the very fine print on the item’s description (and who reads that), it’s only natural for anyone who buys a new computer and sees the Microsoft Office icon on their desktop to assume their computer just “came with it”.

There have been remarkably few examples of the proverbial “cup holder” school of stupid computer user—certainly a lot fewer than the humor sites would lead you to expect. These people are not idiots, by any stretch of the imagination—they’re just normal people, confused by a technology industry that seems to take perverse pleasure in being as obfuscatory as possible. One person who called me about the Microsoft Office conundrum works in launch tracking at Cape Canaveral, and has probably forgotten more about electronics than I’ll ever know! But unfamiliar technology frustrates everyone equally—even people with engineering degrees from MIT.

The aggravating thing to me is that at least some of these cases stem from venality or sheer apathy on the part of technology companies. Why do they even do it? Do they think it’s somehow going to make people more willing to buy their product?

How hard would it be for Microsoft to change the launch screen to say “This is a trial version, unless there was a piece of paper with a registration key on it bundled with this computer” rather than just blandly ask for the key people will assume they were supposed to get? What chance does the average not-so-tech-savvy person have against that kind of obfuscation?

It reminds me of the time I misguidedly talked my parents into buying a refurbished iPod Shuffle, thinking Dad could use it to listen to the audiobooks I’d given him. Apple made incredibly simple devices, didn’t they? It should be easy to show him how to use it. Only…he never could figure out how to work it, and eventually lost it. $100 down the drain.

I think there is a tendency, especially on the part of computer geeks, to assume that just because something is easy for us, it ought to be easy for everyone. This, in turn, leads to disdain for “idiots” who can’t manage it, and for companies that charge for “easy” services like e-book device setup or computer repair.

But there are things that all of us don’t want to, or don’t know how to do, and find it more worthwhile to pay someone else to do them than to take the time or spend the money to learn how for ourselves. How many people who scoff at paying $30 to set up an e-book device will still turn right around and pay that same amount every few months for someone to open a couple of valves and replace a couple of swappable components on their cars? Not everybody will want to or even be able to devote the time or interest to learning how everything works.

I think that this is an important lesson to remember, especially for those relating to e-books. Honestly, none of the e-book devices I’ve tried so far is something I’d really feel comfortable presenting to my Dad, or to any “average” person who didn’t have an excellent working knowledge of computers.

I’ve generally had to fiddle with Calibre for e-book conversions, replace recalcitrant cables, and generally just tinker to make things work right. Who would do that for Dad without me around? As I’ve had brought home to me in my weeks of tech support, there are some things even I can’t do over the phone.

Say what you will about Amazon’s predatory pricing, or their refusal to support the EPUB “standard”, or what-have-you; what you can’t deny is that Amazon has made the whole e-reading process as close to dead simple as possible. You don’t need to sync it to a computer; you don’t need to know anything about a computer to use it. You just take it out of the box and turn it on, and you’re shopping from Amazon.

And if you can’t buy anything from other e-book stores? That means there aren’t all those other e-book stores to confuse you. Let’s face it, some people are going to be more frustrated than happy to have those kinds of choices. As the old saying goes, a man with one clock always knows what time it is, but a man with two clocks is never sure.

In the end, I’m more happy with this job than I originally thought I’d be. It’s a chance for me to help ordinary people navigate around the shoals of technology that are supposed to make their life easier but instead make it more frustrating. If they occasionally pronounce “Linksys” as “Linkies” or even “Linskies”, well, that unfamiliar word in a strange logo font is a little hard to read, isn’t it? Nobody should be expected to know everything about everything.

I can’t write a tech support post this long without indulging in a little tech support humor, so here are Three Dead Trolls in a Baggie to demonstrate how not to do tech support.