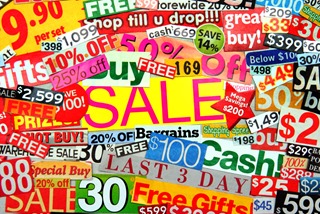 The New York Times has a revealing piece looking at the phenomenon of the “list” or “manufacturer’s suggested retail” price. It turns out that the MSRP sees the most use for tricking customers into thinking they’re saving money.

The article uses the example of Overstock.com, which was fined $6.8 million for using misleading reference prices to trick customers. It also cites a number of other retailers whose price policies are confusing, to say the least. There’s a Le Creuset skillet that sells for around $200 on most retailer web sites, but those same web sites claim it has a “list price” of $250 to $285.

The really funny thing is that this article does mention Amazon with reference to some of these prices, but doesn’t go into the single most egregious case of “suggested” retail price abuse—books, whose list price actually is meaningful. It could have gone into the time publishers broke the law to require Amazon to honor their “suggestion.” We just had the Supreme Court decline to hear the case. (But then, this article came out the day before that was announced.) As the final result, Amazon now lets publishers set its e-book prices, while gleefully undercutting them on the print volumes.

But interestingly enough, publishers aren’t the only manufacturers who aren’t terribly pleased at retailers discounting their wares. Most deal with it through a “minimum advertised price” stipulation in their contracts, however. This is why sometimes on Amazon, BestBuy.com, or other e-tailers, you’ll see products with a price you can’t see until you add the product to your shopping cart—they can still sell the product at a lower price, but are forbidden from advertising it that way.

In any event, anyone who’s been shopping for very long at all already full well knows that “list prices” are effectively meaningless, and the price that matters is whatever competitor is carrying the item. That’s why the Internet is so handy. Sites like PriceGrabber and apps like Amazon Flow let you pricecheck from your phone. And most brick-and-mortar retailers have taken notice. It used to be they’d laugh in your face if you asked them to pricematch Amazon; now many will happily match Amazon, WalMart.com, or a number of other online retailers if you ask them to. (Which is a big area where Barnes & Noble falls down—still stuck in the past, Barnes & Noble’s stores won’t even pricematch themselves.)

It’s too bad those list prices are no longer quite so meaningless for e-books.