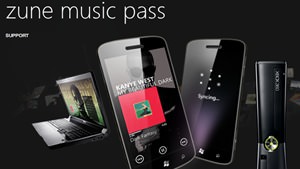 We haven’t had any good DRM server shutdown stories for a while, so it was just about time for another one. It seems Microsoft is about to join the ranks of Yahoo, Google, Wal-Mart, Embiid, Fictionwise and eReader, JManga, and…well, Microsoft.

Or at least, that’s how it looks at first glance. Microsoft is dropping its Zune digital music service. However, this loss isn’t necessarily as big as it looks, at least in terms of encrypted content.

For one thing, even though Microsoft’s FAQ on the matter notes that songs purchased with Zune DRM won’t play anymore, and so do the various news stories bemoaning the shutdown, what they don’t say is that the Zune service hasn’t sold DRM-enabled music for literally years—it dropped DRM about the same time iTunes and other major music services did. (It started talking about it back in 2007.) So, most music Zune subscribers have downloaded from the service over the years will continue to play just fine—which is really a big victory for the idea of not using DRM, when you get right down to it. It’s too bad so many e-books are still locked up in it.

Even though the Zune hardware device swiftly sank in the market, Microsoft kept using the Zune name for its Zune Music Pass streaming music service. (After all, why waste a perfectly good trademark?) Although new subscribers haven’t been able to sign on for some time, existing subscribers have been able to continue using it with their Zune devices, and were able to download ten free songs per month.

Microsoft is replacing it with its “Groove” streaming music service, which will cost less in terms of what you get overall, but it won’t include ten free song downloads per month, and it won’t work with the no-longer-made Zune devices.

Given that most of the music they downloaded is still good, and they’ll still be able to copy music onto and off the devices, my sympathy for Zune owners is fairly limited. I own early iPad and iPod Touch devices that date back to around when the Zune was made, after all. Apple is still manufacturing those lines, but you simply can’t download software for the devices I own anymore because Apple requires updates for iOS apps to work with versions of iOS newer than my devices can run. So, guess what? Years-old hardware won’t continue to be supported forever, regardless of whether the company still makes devices under that brand name.

Anyway, I suspect the Zune’s appeal was limited as far as most TeleRead readers are concerned. Unlike the iPod Touch, it wasn’t as open to software development, so it wasn’t really e-book friendly. To put e-books on it, you basically had to convert them to jpeg images and use the image viewer to read them. I know that once I learned that, I stopped being interested.

(Thanks to Garson O’Toole for the tip.)