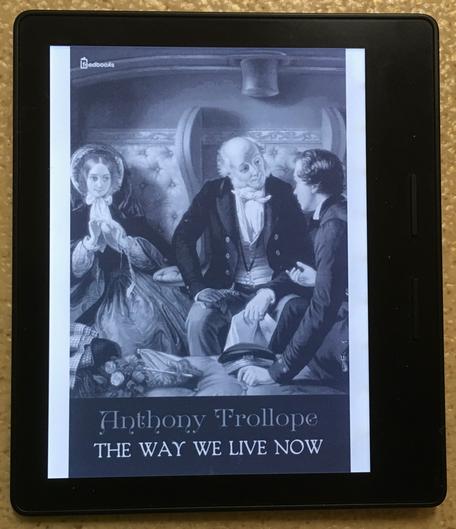 Is Amazon’s $290 Oasis e-reader just a “fashion accessory” like Gucci shoes? Is the real market “affluent women from 30 and up who have ample time to read”?

That’s the opinion of Mike Perry, a TeleReader community member whose comments I value even when we disagree. TeleRead Editor Chris Meadows and Senior Writer Joanna Cabot also question the value offered by the pricey e-reader.

Well, like TeleRead Contributing Writer Len Edgerly, author of our first Oasis review, I’ve now tried out the hardware. And I can say we’re talking about far more than a fashion accessory here—even if the price should be a lot lower.

Granted, the Oasis suffers from lack of an all-bolding option, about which I’ve written at length, most recently in yesterday’s post headlined AWOL: All-text bold on the $290 Oasis: A workaround for aging eyes. Alas, the workaround involves adding boldface to individual e-book files. That can scare off many nontechies, and least here in the U.S., this approach won’t legally work with DRMed books. Our overlords in D.C. won’t let us, with a few exceptions, strip the DRM even for legitimate purposes such as adding the bold (thank you, DMCA).

Lack of a-t bold is is a huge mistake; older people are a major market for dedicated e-readers—including, yes, Mike, well-to-do women who can make time in their lives for books. Even the Oasis’s Helvetica, probably its darkest font, won’t be bold enough for many of those with contrast-sensitivity issues. The 300 d.p.i. six inch screen just isn’t the solution —this is a different matter from resolution.

Here’s another complaint. Along with all other e-readers, the Oasis needs more powerful e-reading software with more options, available through an “Advanced Menu,” for which Amazon if need be could charge a tad more to justify the increased support costs. Check out the rich collection of options available through Moon+ Reader Pro and other Android e-reading apps. Why is Amazon inflicting such dumbed-down software on us? Am I endlessly vexed about this? Yes, and you might well be, too, if you’re a serious reader and see Moon+ in action.

I’ll also regret the lack of text to speech so far (it might yet show up via Bluetooth connections with other devices). And of course even today, not one Kindle can natively read the industry ePub standard, whether or not someone taints a book with DRM.

Now, with the negatives out of the way, let me agree with the Guardian newspaper that the Oasis really is “special” and worthy of comparisons with luxury cars. Here are six reasons why the Oasis is more than an expensive “fashion accessory” even if the $290 could just about buy three Paperwhites at the current $100 sale price (normally price $120).

1. The Oasis has ten LED front lights compared to six for the Voyage and four for the Paperwhite. Whether for that or other reasons, the perceived contrast is slightly better even if the actual display contrast is apparently worse than that of the Voyage and Paperwhite. The whiter background apparently helps the words stand out a little more. If nothing else, the background lighting is more even. Now, please, Amazon, bring on the boldface option that Len and I are pushing for! The better perceived contrast still isn’t enough for people with contrast sensitivity issues.

Yes, I myself would have preferred the Oasis with text to speech, at least a headphone jack, even if this meant more weight and size; but I will acknowledge the benefits of the lighter-thinner approach for people with severe arthritis—or anyone who reads a long time with one hand. It is more comfortable to hold for prolonged use than my Nexus 6 phone with a six-inch screen is.

Let’s see if the rumored Bluetooth capabilities will happen, with audio connections. If not, perhaps Amazon needs to consider an audio-enhanced model with TTS built in. Also, how about all the Audible books the now-mute Oasis can’t play through the Echo or any other device?

But meanwhile we have here a reader considerably lighter than even the average paperback—one more argument to use against Luddites.

3. The wedge shape, not just the lighter weight, really does make a difference, in terms of being better able to hold the reader comfortably in one hand. No fashion statement alone. We’re in the realm of practicality.

Mind you not everything about the Oasis is practical. Like the Guardian and others, I wish that the provided cover completely protected the back, and of course, unlike the Kobo Aura H2O, the Oasis is not waterproof. Plastic bag, anyone? That should be an essential if you think you’ll splash water on the Oasis.

4. The Oasis’s page buttons really do make a difference. Sometimes I just want to tap the screen to move on to the next page, but most of the time I’d rather go with the buttons, especially for one-handed use. The Voyages’s buttons or quasi-buttons are pathetic, hard to use. The Oasis’s are fine. I especially like the ability to choose which button advances a page and which takes me back one. Also, thanks to an accelerometer, I can decide which side the buttons should be on, left or right. Here I’m not even left-handed, and I find that feature useful.

5. In general the Oasis just works better than any other E Ink e-reader from Amazon or elsewhere. Occasionally a page tap does not register, but this happens less often than with other E Ink devices I’ve used. As for highlighting of text, the Oasis is buttery-smooth just about all the time. Little details. But if you’re a constant reader, the kind of customer Amazon has in mind, that matters. As expected, page turns are snappy—perhaps more so than on other E Ink e-readers I’ve tried.

6. For 30-minute a day, battery life is rated at 28 hours with a brightness level of ten and the WiFi off. “During my testing, with data connectivity on and the brightness set to level 15,” writes the Guardian’s Samuel Gibbs, “I managed to read 200 pages or around 6 hours without the battery case before getting a warning that only 10% battery was left. With the battery case attached I could easily have read two, maybe three books under the same conditions.”

Battery life isn’t so important to Len, who smartly suggested that Amazon knock the price down and offer the reader alone without the cover-charter for people who didn’t need it. But I myself love the idea of not having to worry about battery life. I normally leave my phones and e-readers plugged in when reading and admit it is due to an irrational fear of running out of juice at a crucial time. With the Oasis, I can more confidently unplug.

The glories of trickle-down tech

Keep in mind where I’m coming from. TeleRead dates back to the 1990s and started as a digital library advocacy site, with a focus on digital divide issues. As a commercial site, we can’t write about them as often as we would like, but this priority remains. From that perspective, I’m glad the Oasis is around. The price will inevitably drop, and who says the well-off are the only ones who could benefit from, say, less of a strain on arthritic hands? In a future post, I’ll have more to say about the Oasis in a digital divide context. We need to make e-reading—and any other kind!—as easy as possible for the masses. Better tech can’t replace well-prepared, dedicated teacher and librarians, but it can help.

Note: For more screenshots, see the Guardian review, as well as my comparison between (1) an Oasis without boldface showing and (2) a modest little Paperwhite displaying an all-bolded file.