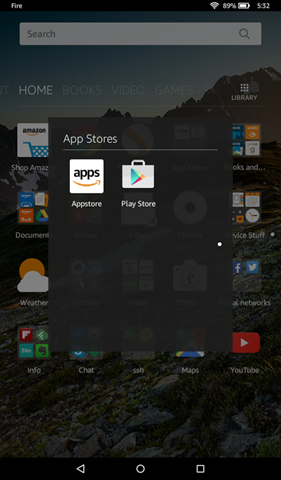 Well, that was remarkably simple.

I had nobly intended to pretend that I was an average, ordinary Fire tablet user, who had to exist solely within the Amazon ecosystem and make do with only the apps I found there. But I have a confession to make: I just couldn’t do it. It was simply way too annoying.

I realized that by even trying, I was effectively killing my desire to get much use out of the tablet at all. Apart from watching an episode of Flash on it last night after work via Hulu (and my Karma Go 4G hotspot, after the WiFi at the brewpub where I was eating dinner proved to be too slow to stream it), I haven’t really done much with it. And if I’m not even going to use it, what’s the point of having it?

So, prompted by David Rothman’s post explaining how to install the Google Play store on a Fire, and Paul’s post talking about doing it himself, I took the plunge. It took me about half an hour of tinkering and puttering around to figure it out.

The first step was to enable XDA debugging via USB. To do this, you have to go into Settings –> Device Options and tap on the serial number seven times to enable developer mode, then go into the developer menu and turn on the debugging option.

But that’s only half of what you need to do—you also need to install the ADB drivers and the Fire ADB drivers. And for whatever reason, the ADB installation portion of sd_shadow’s script wasn’t working for me. (I gather it didn’t work for Paul either.) Fortunately, there were other options.

To install the XDA drivers, I used this alternate installer instead. To get it to work, first you have to scroll down to the bottom of the main post to where it says “Attached Files: KindleDrivers.zip” and install that package, then follow the instructions listed above under “Third Option.” It’s a little complex, and unfortunately I lack the time to do a nice lengthy how-to guide about it right now. (Note that when you select “Android –> Android Composite ADB Interface,” you’ll get an error box saying it may not be compatible. But it is, or at least it was for me, so just ignore that and hit “continue.”) Fair warning: do this at your own risk; I can’t help you if you somehow brick the device.

But anyway, after I followed those instructions, I ran sd_shadow’s batch file. I could tell it worked because it listed my Kindle under attached devices. Then I ran the section of the batch to install the Play Store, and Bob was proverbially my uncle.

I had already been able to install the Humble Bundle Android app from the SD card. It’s kind of funny, really: for all that Amazon ostensibly wants you to use its own products and services exclusively with its branded hardware, it seems as though the company really didn’t put a whole lot of effort into locking out external app stores, the ability to install from untrustworthy sources, or even developer mode and XDA debugging.

So you can infiltrate external apps on without even having to root and install a third-party distribution like CyanogenMod. Which is nice, because there are parts of the basic Fire operating system I don’t mind keeping. So I effectively get the best of both worlds: an Android tablet that lives within the Kindle ecosystem, but can install apps from Google, too. Bonus!

(But did I void the 1-year warranty I paid $10 extra for when I bought the tablet? I hope not. After all, I didn’t actually “root” it or bypass any real functional security measures. I just used options that were right there in the settings menu and copied files over from my computer. I suppose I’ll find out if anything goes wrong with it within the next eleven and a half months.)

Once I had installed the software and logged into my Google account, I was able to go into the Play Store app and install various applications. I did get a few glitches, like apps I had already paid for showing up with a price listing on them. Apparently somehow the store thought I was both logged in and yet somehow not logged in at the same time. (I also got occasional pop-ups about how I needed to try logging in again, but it still showing lists of apps specific to my account.)

Once I got through that, I was actually able to go to the Play Store interface on my desktop computer and tell it to install apps to my Fire from there. (It showed up as “No Carrier Amazon KFFOWI”. So I guess that, in its hardware name, at least, it still is a “Kindle Fire” after all, but I wonder what the “FOWI” part stands for?)

There were still a few odd glitches, and some apps that wouldn’t work. For instance, Inbox would install, and launch, and even briefly show a list of my messages, but when then crash right back out to the launcher. The Google Plus social network showed up as incompatible with my device. But oh well. I’ll get by without them.

Another weird bit of business: When Hangouts wanted to install the dialer module, I got a launcher pop-up saying an app was trying to call an app store that wasn’t installed, and did I want to launch it with the Amazon appstore instead? I couldn’t make it open the Google store by saying no, though I could go to the Google Play store from my desktop browser and tell it to install the dialer there. (But I hadn’t rebooted yet. at that point. Maybe now that I have, I won’t get that anymore the next time an app tries to launch the Play Store? We’ll see.)

Another odd glitch: when I ran Google Maps and tapped on the current-location crosshair, the app said Google Services wanted to access my location…but even after I granted permission, it still wouldn’t find me. But I zoomed in some and tried again, and it asked if it could use WiFi networks to locate me, and after I agreed, it did. The location wasn’t exact, but it was close enough.

I was able to install e-reading apps like Instapaper, Press, and Google Play Books that weren’t available from the Amazon Appstore, and they just worked. So did the YouTube app—the real YouTube app, not the shortcut-to-a-mobile-website version that’s all the Amazon store has. Ditto for games like Ingress (though without real GPS location tracking, their location options aren’t as granular—but on the bright side, Ingress puts me right next to a portal from within my apartment that’s just out of range from ordinary GPS!). And I was able to use the version of Swype I had previously purchased that has a lot better functionality than the trial version on the Amazon appstore. (For example, it has numbers and symbols available on long-press on keys, which the Amazon one didn’t.)

And one really peculiar thing about it: once everything was installed and I’d rebooted, the Play Store suddenly started automatically updating apps on my tablet (like Evernote, Facebook, Twitter, etc.) that I had previously downloaded from Amazon. And they worked fine after the update, too. That was good—I’d worried about having to keep track of updates via two separate stores, but it looks like they’re very much the same apps overall and the Play Store can just tell.

I agree fervently with Paul: This $50 Fire suddenly just got a lot more useful. I wonder if it’s possible to add app widgets to the basic Fire launcher somehow?