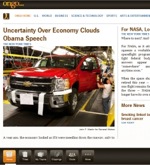 From the Netherlands’ website eReaders, by way of a Google translation:

From today the new platform Ongo available. Ongo is a personal platform for new readers turn to for news articles from various sources. The makers want to make it easy for users to find news, organize and share with others.

Ongo was founded in 2010 by Alex Kazim, including previously worked at eBay and Skype. In September 2010 was a start-up investment of $ 12,000,000 of Gannett Company, The New York Times and The Washington Post.

According to Kazim Ongo is a platform on which the reader is central. “Ongo redefines legibility and provides the most wanted content from top sources.” In Ongo focuses on intensive reading, along with useful tools to articles about them, to preserve and share. “Many of today’s new platforms are inconsistent and distracting, and offer only parts of articles, advertisements and links together.” Ongo In contrast, according to the makers, it mainly to the reading experience.

Readers to access articles Ongo of a variety of sources, including The Associated Press, The Guardian, Slate, The Boston Globe, The Miami Herald, USA Today, Financial Times, New York Times and The Washington Post Picks. There, in the future other sources added.

The new platform works as a web application, which readers can read the articles and organize. Ongo is therefore both be viewed on computers as tablets and smartphones. Readers may include items that create bookmarks easier later on can be read again. Furthermore, Ongo called “clubs”, where visitors can discuss news.

A subscription to Ongo cost $ 6.99 for one month, which the subscriber has access to the major news sources in the range. The other sources from 99 cents per month per publication added to the subscription. At the launch, every new subscriber Ongo one month free free access to the platform. In addition, the website also offers day passes away Ongo which you can try for free.