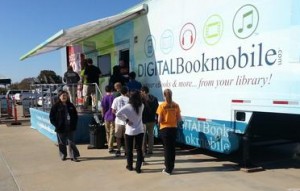 That’s the question a MobileReader asks in a post about the largest supplier of e-books for U.S. public libraries.

“As this trend of OD providing most ebooks and audio books to the libraries grows, I see more and more OD tentacles everywhere.

“I feel like in 15 years OD will control the flow of all such digital content around most countries. In return, most public libraries around the world will become web site shells and vehicles for delivering OD content because most of them won’t need physical places anymore. Is that bad? I think it is pretty bad.

“Just think about this side effect every time you conveniently borrow your OD ebooks from your local library.

“There are other things to be scared of when it comes to OD and such corporations providing content to the libraries. For instance, your privacy is very much compromised on multiple levels. Before it was just you borrowing a book from your local lib. Now everyone involved will have big dossiers about your borrowing/reading behaviours. The other issue is the filtering. We all might end up living in bigger filter bubbles due to corporate algorithms controlling our reading/borrowing actions.”

Hello, LovieDovie? Check out the TeleRead/LibraryCity proposal for a national digital library endowment and separate public and academic digital library systems. I pleaded for billionaires to buy OverDrive for America’s public libraries. No such luck. Now a Japanese company called Rakuten, the same one that bought the Kobo e-book and hardware company, owns OverDrive, which is to “work closely” with the corporation’s other properties.

I don’t necessarily see OverDrive as an enemy. America’s public library systems could still use it and other companies as contractors, with ample privacy protections and other precautions in place (of course OverDrive might argue that it already cares, and the Electronic Frontier Foundation‘s findings are more encouraging than many would expect).

What’s more, for all its flaws, OverDrive has done some damned fine work in areas such as e-book evangelism—complete with a digital bookmobile.

Even so, I share many of LovieDovie’s fears. Do we really want OverDrive executives, who in fact rely on Amazon for a great amount of their content, to serve in effect as America’s de-facto public librarians? And what becomes of the real librarians? Will contractors replace them?

At the same time let’s remember that Steve Potash remains CEO of OverDrive, and his wife, Loree, is a librarian by background (note: I don’t know if the just-linked information about her is correct in regard to her current role in the company). They are highly aware of the nuances of the library culture. It is not Steve and his present colleagues I fear. It is their successors. The U.S. book industry has not fared particularly well under foreign ownership of many of the big players, which, more than ever, are focused on bestsellers at the expense of good books. Will public libraries end up the same way, with commercial interests prevailing over those of Jane and Joe Library Users? Some would say that to a great extent that has already happened.

Keep in mind that libraries and librarians are about a lot more than books, digital or public. We’re talking about such issues as family literacy initiatives and other outreach efforts, not to mention public libraries’ importance in American civic life. To weaken public libraries is to weaken America, especially with all the newly arrived immigrants whom libraries can help assimilate. Moreover I share ALA official Jamie LaRue‘s personal hope that libraries can play a greater role as content originators, and like Jamie, I would like libraries to be able to own e-books for real (even though I also see room for other business models). An over-reliance on OverDrive will not further such goals.

OverDrive itself could help by going on record in favor of national digital library endowment and the public and academic e-libraries at the national level. I’ll hardly count on it. But who knows? Even for OverDrive, there are no certainties. Remember, Amazon has gotten into the K-12 e-book business, and massive direct sales to public libraries could follow in time, with OverDrive bypassed. Perhaps if Rakuten wants to watch out for its shareholders, it might see the advantages of a sell to a national digital library endowment after all, before Jeff Bezos prevails.

Meanwhile, lest you think that LovieDovie is a Luddite, I’ll share a quote from a second post showing that he or she simply evinces a healthy interest in the future state of libraries:

Come back to this topic 20 years later and write what you think about the state of the local libraries then. I am saying that as long as most people think that this is the libraries should operate, like letting a corporation run the backend and the frontend of our libraries, we won’t have free and fair libraries in the future. Probably the number of physical libraries will diminish and those who can stand against the sands of time will mostly be culture centers. Again you do not need physical hospitable buildings to provide digital lending library services. For instance, Gutenberg.org and Archive.org do not have cafes or buildings to hang around.

Anyway the issue I am raising here has nothing to do with paper books whatsoever. I am talking about one corporation dominating our libraries. Paper books will be here for a while, that is not the main issue. OD providing lending library or not does not make a difference on the fate of paper books. That is just the way techology replacing another tEchnology. That should not be the part of the discussion here.

Needless to say, these are not U.S. issues alone, given OverDrive’s importance on the international library scene. My own vision is of a national digital library approach for all countries—each controlling its own collection, although able to pick up content from elsewhere.

Related: The cell phone club book idea. Anyone’s welcome to it, especially libraries and their contractors, including OverDrive.