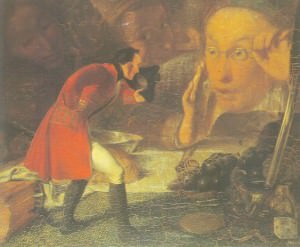 No, you don’t have to be a Brobdingnagian to enjoy e-books on a your new phone with a six-inch screen.

Let me share a few tips as the happy owner of both a Nexus 6 and a Huawei Ascend Mate 2. The same advice would also apply to many other king-sized phones, such as the 5.5 inch iPhone 6 Plus.

1. Stop thinking you have to wrap your fingers completely around the phone. You can still hold the phone in one hand and page ahead with taps on the screen—or, with programs such as Moon+ Reader Pro or iBooks, you can even scroll with swiping motions. Buy a good drop-proof case to make you feel more confident.

2. If sitting or lying down at home, you can use an appropriately sized pillow to rest the phone against.

3. Or, gasp, when standing, you can hold the phone with two hands.

Some might still complain of the weight. Fine. Let ’em. But remember that a six-inch phone will still be lighter than, say, a Nexus 7.

If nothing else, consider that you’ll probably have your phone with you a lot more than your tablet. The best solution, really, is not to settle on one platform or another for constant use, but rather to read with the most appropriate device for the moment. And, yes, that could include a full-sized tablet or a large e-reader.

Most everything has its trade-offs. While a tiny four-inch phone may be comfortable to hold, remember that a Nexus 6 can display a lot more words at once on the screen.

TeleRead Editor Chris Meadows is now a fellow Nexus 6 owner, having received one from a very thoughtful brother over the holidays, and I’m looking forward to his own e-reading tips for phablet fans. If nothing else, I’ll be curious how well Chris’s 6 fits in his pockets. With my jeans—nothing unusual about them—I have no trouble carrying around the 6 in my right side pocket. It’s the only object there, normally. But if I were carrying keys, I could avoid screen-scratches with the right screen protector. I bought a Voxkin, and as for my case, it’s a SUPCASE.

Related: Powerful Moon+ Reader Pro e-reading app is on sale for just $2.49: New version offers blue light filter. I told how superior Moon was compared to the Kindle e-reading app—but I left out something. You can’t scroll with the Kindle app. It’s another illustration of Amazon’s fixation on KISS at the expense of smart customers who are tired of the basics.