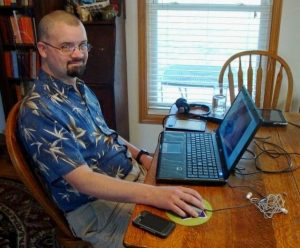 TeleRead.com, the web’s oldest site devoted to general-interest news and views on ebooks and related matters, has just moved back to TeleRead.org.

In keeping with the .org, we’ll stand up for the commonweal and write on topics dear to us and our long-time community members. We won’t worry so much about pleasing Google and other SEO-related deities. Hosted at WordPress.com, the new site will cost a fraction of what the .com version did. So no need to chase after ads right now.

TeleRead.com will remain online briefly as a locked-up WordPress site, then as static HTML.

Links to items there will still work. But new posts will appear at TeleRead.org, and we’ll be grateful if you point to that address from your own website. Also consider Liking the TeleRead.org site on Facebook or other social media and voluntarily donating to Chris and other writers via PayPal (more on that).

We’ll shut off comments on the existing TeleRead.com site today since we lack the resources for moderation both there and on TeleRead.org. We hope you’ll resume sharing your valued insights at the .org site, where we have reproduced a few posts to kick-start the dialogue.

The new TeleRead site can prominently display comments from community members, is easy to navigate, and should play well with the desktops, tablets and cell phones. Our main RSS addresses will be:

Comments RSS addresses will be:

Google: An unwitting killer of TeleRead.com

So what happened? Well, this might give you a clue. In commenting on what would be the full shutdown of the venerable BookSlut, I wrote: “Here at TeleRead, which dates back to the mid 1990s and switched to a content management system in 2002, I can’t even begin to tell you how difficult it is to maintain an older site. Google doesn’t help. It keeps changing the SEO rules, and meanwhile the WordPress technology behind the scenes becomes more complicated, not less. Yes, the interface is better. But I am sick, sick, sick of the never-ending war among plug-ins, or, worse, the need to get TeleRead’s WordPress settings just so for the all-powerful Google gods.

“If TeleRead shuts down, the reason won’t be ad-blockers. It will be because Google, WordPress, Facebook, Amazon and brethren have made the Net an increasingly challenging place for smaller and medium-sized sites hoping to hang around for the long term…”

Google almost surely was penalizing us for missing images and links to now-dead sites or worse. Consider the scores of dotreader.com links, which, we discovered years later, led to a malware site, a loathsome successor to the original dotreader.com. DotReader was the reference e-reading app for the OpenReader format for e-books. Our OpenReader campaign prodded the International Digital Publishing Forum, the main industry trade group into getting serious about consumer level e-book standards. The result? ePub. Of course, the big boys mucked up ePub with proprietary encryption-based DRM. But imagine what an industry-standard format meant to small publishers, public domain sites and others.

In a fairer and kinder world, Google would have cut us slack in recognition of our importance to e-book history and have given us ample time to get TeleRead in order. But these days algorithms are almost the whole show, and understandably, Google’s penalizes sites with thousands of dead links and problematic ones. We scrubbed the dotReader links, but this was indicative of the Herculean task still ahead even after hundreds hours spent on earlier SEO-related infrastructure efforts. We didn’t even try lobbying Google. What’s the use?

Not just Google: Other do-plenty-of-evil companies (even if they didn’t mean to)

Furthermore, the online world is increasingly hostile even to niche standalone blogs with perfect SEO. Giants such as Google and Amazon either couldn’t or wouldn’t pay TeleRead the ad dollars the older version needed to survive. We did experiment with sponsored posts–special thanks to Playster–and with more financing and more visitors, that model just might have taken off. Traffic competition from major corporate-owned platforms such as Facebook and Medium, however, would have been still more fearsome in the future. They, not other e-book sites, were the real long-term threats to our independent blog. The Atlantic‘s Robinson Meyer put it well in writing about the man behind Medium: The Forrest Gump of the Internet: Ev Williams became a billionaire by helping to create the free and open web. Now, he’s betting against it.

Oh, well, at least Williams is not Facebook. As he has said: “Primarily what we’ve seen is that the social networks have gotten really, really big, and they drive more and more of our attention.” Meyer sums up the mess: “With this size, they also collect more revenue: 85 cents of every new dollar in online advertising went to Google or Facebook in early 2016, according to a Morgan Stanley analyst quoted by The New York Times.” I wish William luck: I just wonder if even he will survive.

While WordPress.com is itself corporate, as part of Automattic, we’ll essentially be using it simply as a hosting service, and at least we’ll be able to escape the war among plugins since all will be Automattic-blessed. We’ll also enjoy far more control over presentation of our content than a smaller site would at Medium. Like the Medium platform, Automaticc is a pygmy compared to Google and the like. But it has more technological firepower, and has its own collection of communities revolving around its products.

In addition to lowering our infrastructure costs, TeleRead will also stop paying writers, even regulars. I’m not happy about that. But it’s only way for the site to go on, given the economics of today’s web. I would have shut down TeleRead, but Chris Meadows and colleagues far preferred that we keep it alive even if they had to write for free.

Chris, along with our other talents, can now focus on relevant topics they most care about without my nagging him or anyone else about optimal SEO. Needless to say, I won’t expect nearly the same frequency of contributions. But at least TeleRead.org will be there when the spirit moves our regulars or me to write. What’s more, if you want to donate to individual writers, you’ll soon be able send money via PayPal directly to them via our new site’s About page. I’m skeptical about the open-palm approach, but I’ll be delighted to be proven wrong. The idea here isn’t to get the writers to pander to anyone. If you like what they write because they want to, then donate. If not, don’t. No donations will go to me. I don’t want to compete with Chris and the others.

Endless thanks to our editor and colleagues for their past and future contributions. I have been so lucky. Chris, he of the sprightly prose, is the son of two librarians and, like the other regulars, is a long-time lover of e-books. Paul brings us the brains, wit and sensibilities of a Cambridge man at home on the global tech scene. Joanna is a teacher, not just a commentary-oriented journalist, and writes authoritatively on K-12 issues in addition to standing out as an energetic consumer-advocate for her fellow e-book lovers. Susan Lulgiurai is a gifted former newspaper reporter with an interest in the New York publishing scene. I also hope that at some point we can bring back some past people such as Robert Nagle and former TeleRead Editor Juli Monroe, and we’ll likewise welcome relevant passion-driven posts by others who can write in an appropriate style. Reach us at newteleread@gmail.com.

My thanks also to Dave Roberts at Web Marketing Advantage (who stuck with us even though TeleRead was a massive time overrun) and Josh Morley at MarketingTheChange.com (Josh gave TeleRead its distinctive appearance and suffered his own time overrun).

Mega-corporations vs. the small guy: We need both models—but more balance, please

Let me wind down with a reminder of the TeleRead vision from two decades back. I wanted a net far more responsive to societal needs than the present internet—complete with major librarian-run search engines, as opposed to a system that is so friendly to hucksters and greedsters and in certain respects is so ahistorical. Yes, we deserve a dynamic Web. But the United States and other countries also need national digital library systems with provisions for effortless long-term preservation, including stable links when called for, a must for the most important networked books and other items. The core cause of TeleRead was and is well-stocked national libraries in the U.S. and elsewhere, ideally with financing from national digital library endowments.

Yes, Google serves a purpose. I’m a capitalist and don’t want Google and the rest to fade away. I’m a constant user of Gmail, not just the search engine. I buy e-books at Amazon and love the customer service there despite the company’s oft-control-freakish ways, such as Jeff Bezo’s stubborn refusal so far to offer an all-text bold option on Kindles (no small detail, potentially, for many people of a certain age). My boycotting of Google, Amazon, and the other corporate giants would hardly change the world.

At the same time, however, I’d welcome more appreciation of the roles of librarians, writers, and other noncorporate people, as well as more regulation of megacorporations in areas such as anti-trust.

If you really want to honor the TeleRead tradition, don’t just be a regular reader and commenter at TeleRead.org; also vote for politicians open to a better balance between the commercial and noncommercial, no matter what country you live in. How disappointing–that we must move on from TeleRead.com partly because the original TeleRead vision for the internet has not won out so far! May this change!

Yes, feel free to share your thoughts on our move and the increasing corporate dominance of the internet. While we’ve locked up the comments area on TeleRead.com, the .org one awaits you.