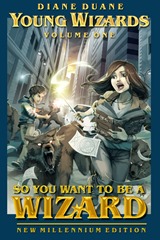 A couple of years ago, I mentioned that Diane Duane had started updating the early books in her Young Wizards series.  (Joanna wrote her own post about it here.) The first book was published in 1983, and later books have been written in the years since then. Technology was always current to the publication date of each book, but only a couple of years were supposed to pass in the lives of the characters. As time has gone by some of the technological aspects of the early books in the series haven’t exactly aged well.

While long-time readers were mostly willing just to go with it, Duane had been informed that the anachronistic nature of early books in the series was turning off new readers. Also, she’d gotten a bit more experienced as a writer since then, and I well know the feeling of looking back on earlier work and cringing a little at things you would have written differently now.

So she set about revising and updating the series into “New Millennium Editions,” featuring more modern technology and geography, and selling them (along with many of her other works) on her DRM-free multi-format international e-book store. I picked up the first five of them when they were on sale earlier this year, but hadn’t gotten around to reading them just yet. As I mentioned in my review of the series as a whole, I was a little worried that the revised version would lose some of its charm.

Finally, I got around to reading the first volume in the series, “So You Want to Be a Wizard,” which had been updated from 1983 to 2008.

If you haven’t read the books yet, I should explain that the premise of this first one is that a 13-year-old girl from New York, Nita Callahan, makes an intriguing discovery while hiding in the public library from a bully. It’s a book entitled “So You Want to Be a Wizard,” and though she at first takes it for some kind of joke, Nita soon learns it’s completely serious. She meets Kit Rodriguez, a fellow fledgling wizard, and together they go on an amazing adventure. For more information, see my series review, linked above.

Reading the new version was an interesting experience. Enough had been changed that it was sort of familiar and sort of not. Everyone has cell phones now. Nita used to have an MP3 player. Dairene has a Kindle.

(This actually breaks suspension of disbelief for me a little, in I guess a complimentary way to how the lack of technology broke it in the old one for new readers. Nita’s Dad can’t afford a $300 bicycle for her, but Dairene has a $400 e-reader? Though the bicycle was $300 in the 1983 version, too; inflation-wise it should have been $650 in the new book, but even so. Maybe she won it in a martial arts tournament or something.)

But perhaps the most remarkable, and enjoyable, thing is how much didn’t change. The changing technology doesn’t break any of the major events in the plot. For example:

When Nita and Kit first meet, and Kit mentions the boys who caught him off doing magic in the woods and made fun of him, the old book has:

“I know what they said.” It had been a badly rhymed song about the kid who played by himself in the woods, because no one else would play with him. She remembered feeling vaguely sorry for the kid, whoever he was; boys could be as bad as girls sometimes.

“I know what they said.” A bunch of the older boys had put together a badly rhymed rap about the “retard kid” who snuck off into the woods to play with himself; they performed it in the cafeteria, a lot of kids got video of it on their phones, and there’d been much discussion about whether it was worth putting up on YouTube. Nita remembered at the time feeling vaguely sorry for the subject of their mockery, whoever he was, and thinking that boys could be nearly as cruel as girls sometimes.

You’ll notice that, apart from the revision to insert new technology, the parts that remained the same have been rephrased and polished to flow better. This is essentially how the book plays out. A few scenes have been revised and expanded—most notably early on in the book when Nita is running from her playground bully nemesis Joanna before she finds the wizardry manual in the library. The one completely new scene that I noticed, in which Dairene tries to figure out what’s up with Nita’s new book, was also good for a chuckle or two. And finally, all instances of the wizards speaking to each other in their special Speech have been changed from parenthetical to italicized, perhaps to bring it in line with usage in later books.

So what’s the verdict? Mixed, I guess. The story itself and all the characters within it are still the same. The new scene and most of the revisions and polishes for flow work. (Though I was kind of sad to see Nita’s wry thought about how many bottles it would take for Joanna to mail her home replaced by something else. I didn’t think the new line was quite as funny.) I still sank as deeply into the world of the story as ever (mostly), I still chuckled and sniffled at all the right parts. I’m still enthralled by the metaphor of Nita going to her library and finding a magical book that transports her to faraway worlds. I mean, don’t we all?

The thing that didn’t work quite as well for me was the modernization. I don’t begrudge it. I completely understand why it was necessary and agree it’s a good thing if it can help new readers get into this marvelous, magical series. And I’m not even sure whether it was the modernization itself or just that the book was changed at all from the old familiar words that jarred me. I would keep running across things that were changed, or places where new technology was stuck in, and it would bump me out of my reading trance a little.

And in some irrational way it feels a little like, well, I’m losing close friends and playmates. The “old” Nita and Kit were 12 or 13 in 1983—just a couple of years older than me. They were people who grew up in the same times, experienced the same things as me. They would have seen the original Star Wars trilogy in the theaters when it first came out, and gone to school when PCs were amazing and cool and more than a little magical themselves (which was the whole point of the third book in the series!) and the only kid with a cell phone was Zack Morris.

But now they’re suddenly 23 years younger than I am, and belong to the next generation, to whom these things are old hat, or worse, boring and uninteresting. How can I relate?

Of course, in one respect this isn’t exactly new, given that recent books in the series were set in the present day, with Nita and Kit at the same age. And given that part of the point of the books is to comment on events current to them as they are published, it would be silly to expect all the sequels to remain ensconced back in the 1980s. (Though I wonder if, in another ten or twenty years, this problem will crop up again in future installments.) But still, I could look back at the early books with nostalgia and see the time in which I grew up, “comic book time” be damned. The new editions…not so much.

However, when you get down to it, I can still look back at the early books that way. The original editions aren’t going away. They’re all still for sale on Amazon, B&N, and other stores for the major market areas, and Duane’s own store (as the “International Editions”) for the regions those don’t cover. In fact, as I noticed when I re-downloaded my copy of the first one from B&N to do a side-by-side comparison, the original editions are now better than ever because the typos have been fixed. No more “next Jew chapters,” hurray!

So in the end, if the first volume in the series is any indication, the New Millennium books still have the magic that first hooked me, and are perfectly packaged to bring that magic to a new generation.

Hmm. I wonder if my nieces have been introduced to these books yet? They’re getting to be about the right age to read them, I would think…and this would be a great way to do it.

And speaking of these books, Diane Duane is running a 4th-of-July sale on many titles in her e-book store, including most of the New Millennium Young Wizards titles, until 23:59 BDT (I assume she means British Daylight Time, not Bangladesh Daylight Time) on Monday, July 8. Just use discount code JULY4TH at the checkout. It’s a great time to buy and support one of the few authors savvy enough to run their own DRM-free multi-format e-book store!

Buy “So You Want to Be a Wizard” (New Millennium Edition)

Editor’s Note: I blew it. Eagle-eyed readers may have noticed that an earlier version of this review, which now displays the ultra-rare 5 e-reader rating, included a slightly less-impressive rating of just 4.5 e-readers. The mistake was entirely mine; contributing writer Chris Meadows made it perfectly clear to me in an email that his review of “So You Want to Be a Wizard” (New Millennium Edition) should carry the 5 e-reader rating. During the editing process, I mistakenly uploaded the wrong image. We regret the error. —Dan Eldridge