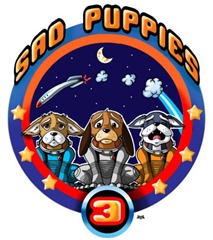 It’s been some time since our last few posts covering the Sad/Rabid Puppies Hugo Awards controversy, and a few interesting developments and articles have come out since then, so it’s time for a roundup.

First of all, Jim C. Hines has put a lot of time and effort into compiling a comprehensive history of the whole Sad Puppies movement, dating back to Sad Puppies’ first appearance several years ago. While there is not exactly any love lost between Hines and the Puppies, Hines has done his best to back up anything he says about them with complete quotes from the Puppies’ members (particularly founder Larry Correia and current organizer Brad Torgerson), and provided links to the source of each quote so people can go and read the quotes within their complete original contexts.

Eric Flint has also continued his discussions of the Sad Puppies affair, by responding at length to a Sad Puppy commenter on his blog, and also responding to a message from Torgerson, and to an article in Breitbart championing the Puppies’ causes. (He also penned another piece relevant to the Puppies, but I’ll get to that shortly.) In Flint’s opinion, the Puppies’ rhetoric does not stand up to the actual state of the science fiction publishing industry, or to the Puppies’ behavior.

However, the biggest new development in the Sad Puppies matter occurred over this last weekend, though it has its roots about a month ago. On May 11th, Tor Art Director Irene Gallo posted a message to her personal Facebook page, saying that she was “[p]roud to have a tiny part in […] making Sad Puppies sadder” by helping with Tor’s publication of a geek feminist book by Kameron Hurley, one of the Sad Puppies’ favorite objects of complaint. In the comments below the post, someone asked what Sad Puppies were, and Gallo replied:

There are two extreme right-wing to neo-nazi groups, called the Sad Puppies and Rabid Puppies respectively, that are calling for the end of social justice in science fiction and fantasy. They are unrepentantly racist, misogynist, and homophobic. A noisy few but they’ve been able to gather some Gamergate folks around them and elect a slate of bad-to-reprehensible works on this year’s Hugo ballot.

This comment went entirely unremarked-upon at the time, but Rabid Puppies organizer Theodore Beale, aka Vox Day, took notice, screen-capped it, and waited. Almost a month later, on the same weekend the SFWA presented its Nebula Awards, Beale tweeted it. (The SFWA had previously kicked Beale out for using SFWA resources to disseminate a racist screed.) Almost immediately, members of the Sad Puppies movement began posting complaints to the Facebook thread. Gallo replied to each complaint with a cat picture, which just made them angrier.

Gallo’s post was sloppy in its construction and its assertions, as social media posts often are. Even Eric Flint, whose previous and subsequent blog posts (such as the ones linked above) have shown him to be no friend to the Puppies, took her to task for it at length. And although it was made on her personal Facebook page, it was made in conjunction with a reference to a Tor product.

To be fair, the post was made at a time when moral indignation about the Puppies’ “hijacking” the Hugo Awards ballot was at its height, and a lot of people were throwing that sort of hyperbole around. Not many of them were taken to task in such a way, but then, none of them were actual employees of Tor, who also publishes a number of authors on the Sad Puppy slate.

Angered Puppy supporters immediately deluged Tor and Macmillan with angry emails demanding action, and Sunday night Tor publisher Tom Doherty posted a statement to Tor.com, noting that Gallo didn’t speak for Tor in that matter and had been taken to task for it. The public statement is weirdly bland and unobjectionable, and reads like it was actually written by lawyers rather than an individual. (Which it probably was.) And Gallo posted another message to her Facebook thread:

About my Sad/Rabid Puppies comments: They were solely mine. This is my personal page; I do not speak on behalf of Tor Books or Tor.com. I realize I painted too broad a brush and hurt some individuals, some of whom are published by Tor Books and some of whom are Hugo Award winners. I apologize to anyone hurt by my comments.

Personally, I’m rather surprised Tor.com left the comments open on Doherty’s statement at all. Usually whenever Tor.com posts something even remotely likely to be controversial (such as statements from Macmillan chief John Sargent in the agency pricing/anti-trust days), it keeps comments firmly closed. It makes me wonder if it might have been done as a passive act of protest against a mandate coming down from Tor’s parent company Macmillan, or perhaps even their corporate owner Holtzbrinck, that Doherty had to issue such a statement. (It wouldn’t be the first time Tor was subject to corporate interference.) But I could be reading too much into it.

Some Puppy supporters, such as Cedar Sanderson and Amanda Green, feel Gallo’s apology didn’t go far enough. On the other side, Chuck Wendig, Gawker, and The Mary Sue have excoriated Tor and Doherty for capitulating. Kameron Hurley, author of the book Gallo’s post originally concerned, has a few comments as well, and The Daily Dot has a good roundup of some of the social media reactions to the affair.

Regardless, it has certainly given rise to a great deal of sound and fury, signifying…well, not a whole lot. Puppies supporters and opponents have both had ample opportunity to show more of their true colors, each providing more ammunition that the other side can use to say, “See? See what they are?” It hasn’t brought us any closer to universal Hugo harmony. But then, we’re probably never going to have that again, at least not for a good long while.

Update: This post has been cited on File 770 and The Passive Voice.