Ars Technica has a couple of great, in-depth pieces laying out in detail the facts of the matter surrounding the upcoming Supreme Court case concerning a Thai exchange student who imported and resold cheap foreign editions of English-language textbooks to finance his doctorate. Publishers contend he earned $1.2 million in revenues, and essentially set himself up as an unlicensed importer/distributor, damaging the publishers’ market for the books within the United States. The publisher plaintiff is John Wiley & Sons, which has also garnered attention for its recent lawsuits against unauthorized BitTorrent distributors of its books.

The article discusses the Costco vs. Omega case, which I covered here, in which Omega tried to use copyright to prevent importation, but notes that even though Omega essentially won the deadlocked Supreme Court ruling by default, the lower court to which the case was remanded eventually found that this was actually a misuse of copyright. It’s not clear just how much effect the precedent will have on the textbook cases, since a $1,299 watch is not a $200 textbook.

“Nobody has to buy a $2,000 watch, or a $1,300 watch, so it didn’t affect people in general,” says [lawyer John] Mitchell. “But anyone who wants a college degree is going to need to get their hands on textbooks. It affects millions of people, and I’m hopeful that now the Supreme Court is going to look at this as a case of importance to everyone in the U.S.”

The reason this sort of thing is even possible stems from the different cost of living standards all over the world. If American publishers want to sell their books in China, or India, or somewhere else where the average salary is so much lower than in the United States, they essentially have to price them commensurate with what people can afford over there, or they just won’t sell any. The problem is that our market is now essentially global, and people can order goods from overseas as easily as swapping out the “.com” from the end of amazon.com with some other suffix.

This is also the reason for the region-protection schemes that were implemented for console games, DVDs and Blu-rays. Even at the dawn of the DVD era, studios knew people would readily buy from overseas to save a few dollars—and since they had the technical means to prevent people from doing so (albeit rather poorly in the case of DVDs, at least), they might as well. (This is also why you can’t buy e-books from the UK in the U.S., and vice versa, though in that case it’s more about selling rights separately to different publishers in different regions than charging more in one region than another.) But you can’t DRM a paper book.

I remember back in the 1990s when the Hong Kong movie craze was at its height here in America, and I looked for sources from which to buy cheap, unexpurgated Jackie Chan and Chow Yun Fat movies. Hong Kong stores like HiViZone (which apparently no longer sells DVDs) and DDD House offered the movies cheaply (legitimately region-free, since Hong Kong studios didn’t seem to care about such things), but took several weeks to ship them. U.S. importer Poker Industries (which is apparently also defunct now) offered them at a higher though still decent price, but with quicker availability—except for titles that had been exclusively licensed by U.S. distributors, even when they were only releasing edited, dub-only versions of them, as with most Jackie Chan movies. 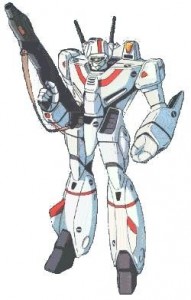 Another case had to do with Japanese toys and their Korean knock-offs from the popular Macross anime series, which had been licensed in the U.S. as part of Robotech. After Harmony Gold got interested in Robotech again, it realized that it (thought it) held the rights to all Macross-derived properties in the U.S.—including imported toys. So it started going after toy importers with legal threats. (Since then, it seems to have quietly backed down from this position—at least I haven’t heard about any other such threats in the last few years.)

My understanding to come out of such cases was that it was legal to import single copies of these items for your own use, by buying them from foreign stores—but if you turned around and sold them again in the U.S., you were violating the exclusive rights those studios had purchased. A 1998 Supreme Court case called Quality King did suggest that copyright owners couldn’t control re-importation of domestically produced items due to the First Sale doctrine.

But publishers have argued (successfully, so far) that doesn’t apply to goods that were originally manufactured overseas (like the textbooks—or, for that matter, the Hong Kong movie DVDs or Macross toys), because of phrasing in the Copyright Act stating it applied to goods that were “made legally under” its authority. These overseas-imported goods weren’t made under the Copyright Act’s authority, the publishers argue—they were made under the laws and regulations of other countries instead, so First Sale doesn’t apply. The Supreme Court found this argument convincing in the Omega case.

When you think about it further, this is exactly the kind of sticky wicket the Supreme Court exists to address. If SCOTUS finds the textbook importation legal, it means that publishers who sell cheaply overseas are essentially undercutting themselves because there’s nothing stopping anyone from turning rogue distributor and reselling at whatever price the market will bear.

But on the other hand, if SCOTUS sides with the publishers’ argument that First Sale doesn’t apply (as it almost did in the Omega case, and certainly would have if one Justice hadn’t had to recuse herself due to arguing in favor of the case herself in a lower court), it could give publishers a legal loophole to shut down used sales of their works (which they would greatly love to do)—just have them printed overseas, and they’re no longer manufactured under the Copyright Act. Not only would this make used sales more complicated (how can you know whether a given book is legal to sell when some of them could be illegal based on where they’re made?), it would also send jobs overseas, which can’t be what the court wants to do.

That second Ars Technica article covers the first day of oral arguments in some detail. And while I wrote the majority of this post before seeing it, it doesn’t seem to change much of the implications here. It seems the Justices were concerned about how this precedent could affect museums, libraries, and even used car dealerships (can a foreign-made Toyota car be legally resold, given that its onboard computers contain copyrighted software?), though rather less sympathetic to the Thai student in the case. None of the options seemed particularly appealing.

Whichever side wins, the losers will probably start lobbying Congress to clarify matters in law—amending the Copyright Act to apply to any goods made anywhere, or closing the loophole that lets foreign importation slip by. The used resale market is huge, but so is the new sale market, and publishers tend to see them as competing with each other—and will do everything they can to try to kill the used market off.

And this is where the e-book angle comes in, as e-books (and paid-download video games and other digital media) can’t be resold (under current copyright law, anyway, though companies such as ReDigi are in the process of trying to change that). But in this field, e-books actually take something of a back seat to computer games, which have been going into digital distro in a huge way.

Computer game distribution networks such as Steam have been converting pirates into consumers with crazy sales and reasonable prices, annoying UK video game retail chains (and, for that matter, American chain Gamestop, which actually went so far as removing a coupon for a free Steam download from physical copies of one new computer game they sold!) with their widespread integration into many hit computer games, and making one Forbes commentator wish that something similar were available for movies. It does DRM well enough that a lot of gamers accept it, where they quail at more invasive versions. And while you can give new digital video games from Steam as gifts at the click of a mouse, you can’t resell them used—which a lot of game developers don’t exactly mind. Nearly half of all computer games sold in 2009 were digital downloads. The proportion has probably increased since then.

If SCOTUS sides with the right to resell used physical goods, I expect this could give a pretty big boost to the digital side of things, as so far, digital goods are by and large resale-proof. Might it lead to publishers throwing that many more resources into increasing e-book sales, including running their own e-book stores to compete with Amazon and other big e-book sellers? It should be interesting to find out.