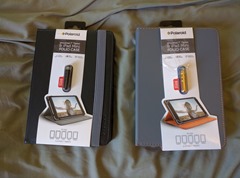 I’m going to be getting a new tablet to try out sometime soon, and I’m about at my limit of tablet cases. My Nexus 7 has its own case, and I’ve been keeping my Fire and my iPad in a cheap Travelocity-brand spandex zipper case that’s perfectly sized to fit the 7” devices, that I got for a couple bucks at a Family Dollar store. (I put them both in the one case, back to back.) I keep a cheap set of earphones and a tablet stand in the zipper pocket on the front. 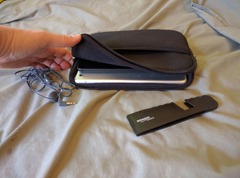 But I needed more cases, so I headed down to check out the selection at a local Big Lots store—which happened to have a Family Dollar and a Dollar General right next to it so was able to check the selection of all three. (As I’ve said before, deep discount stores can be great budget accessory sources.) 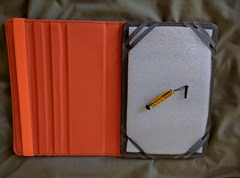 As it happened, the only one of the stores that had any tablet cases was Big Lots. I’d been hoping for something like my Travelocity case, but they didn’t have any of that sort. Instead, I found some inexpensive Polaroid-brand folio cases for $8 each—rendered even more inexpensive by the buy-one-get-one-half-off sale the store was running on them. So I grabbed two of them. (As it turns out, I got an even better deal than I thought. When I plug the bar code into Amazon, it returns a price of $15.88 and only one shade of pink. Though this other Polaroid folio seems similar, albeit without the two-tone color interior/exterior.) 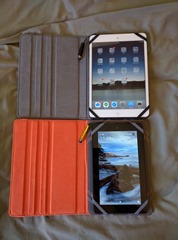 For all their cheapness (I sincerely doubt they’re made by the same company that had anything to do with instamatic cameras!) they have a clever design to them. The section that holds the tablet in has two sets of loops—you use the inner set for something smaller, like my Fire, or the outer set for the larger iPad Mini. 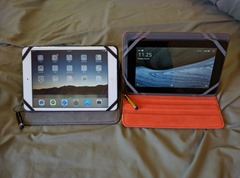 The panel on the right hinges up so it can sit in one of the three notches in the velour cover to turn it into an easel. Or, you can bend the cover back behind the tablet and hold it in your hands. The elastic strap at left loops around the back of the case to hold it shut when you’re not using it. (I tried to use it to hold the cover around behind the tablet, but that wasn’t as satisfactory.) 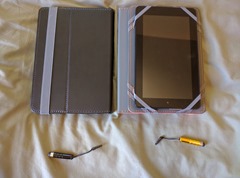 The styluses are kind of weird—they’re really short little stylus nibs, that put me in mind of the stubby pencils we used to use all the way down to the end in grade school. Or maybe some kind of weird rifle bullet, given the brass color of the one with the gray and orange case. They attach to a plastic plug that plugs into the earphone jack of your tablet so you don’t lose it. That said, I’m not sure I’d ever use them that way—they might get caught on something and yanked out, or else they might bang against and scratch up the glass screen. I’ll probably just stuff them in the zipper pocket of that Travelocity spandex case instead. In any event, I don’t often use styluses but they seemed to work okay. 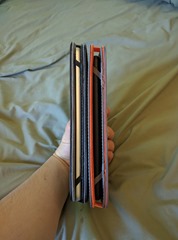 All in all, the cases seem sturdy enough. I’m not sure I’d trust them to protect anything hugely expensive, or in really rough conditions, but they seem reasonably protective, the soft interior of the cover won’t scratch the screen, and the built in three-position easel could come in handy for typing and such. I’m not sure which tablets I’m going to keep cased like this and which are going to go back in the Travelocity case when I get the new one to try out, but I’m looking forward to finding out.

All in all, I think these cases are quite a bargain. And at that price, why not give ‘em a shot to see what they’re like? If they work out really well for me, I might end up buying more expensive cases in the same style sometime down the road.

Maybe you might want to stop in at your local Big Lots and see if they’ve got something useful too. 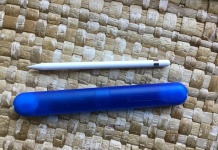 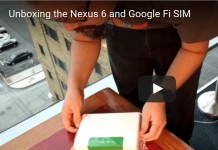 First looks: The 2014 Nexus 6 phone with Project Fi (and better e-reading ahead)