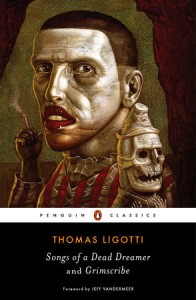 igotti could be called an acquired taste for some, in the same sense that some evangelical preachers acquire resistance to snakebite and strychnine. This most mordant, bleak, and pessimistic of horror writers hardly lays himself out to make things easier for readers, or to court success. “I couldn’t possibly write something that would reflect the true depths of my aversion to everything that exists,” he once said in an interview – not the type of author likely to puff and self-promote his way into Stephen King-style bestsellerdom. And his relationship to his audience is pretty well reflected in the way he described one of his favourite authors, Bruno Schulz: “he has relatively few readers and … those who do read his works celebrate him more often for his prose style rather than for his vision of a world that is a nightmare of unstable and ever-mutating forms.”

Up till now at least. Because now this reclusive, enigmatic figure has been honoured by Penguin Random House in his own lifetime with a Penguin Classics compilation of his stories, comprising his first two collections, Songs of a Dead Dreamer and Grimscribe. Remember that the first of those two was only published in 1986, and you’ll see how fast the Ligotti legend has grown. Cynics might put PRH’s move down to the sudden limelight thrust upon all things Ligotti by the success of True Detective, which references his prose and ideas in its grab-bag of weird and existential horror tropes. After all, only a small handful of (admittedly highly bankable) living authors have the Penguin Classics seal of approval, and we now have the Wall Street Journal jumping on the bandwagon, with a full article on PRH’s decision and a follow-up interview with the grim scribe himself. Penguin Classics pretty much established how mercenary it has become by jacketing Morrissey’s ego-outing Autobiography, and it only helps muddy the waters to know that Ligotti himself has at least referenced the Smithsscribe before. So how cynical is this move? And is Ligotti himself complicit in the exercise?

Well, for a start, you’d have to consider the definition of classic. Does Ligotti’s fiction aspire to that status? Or not actively aspire, but get shoehorned in regardless, or even dragged kicking and screaming into the annals of fame? Well, probably the latter. It’s hard to imagine Ligotti, who has been clinically diagnosed as suffering from bipolar depression, hypomanic states, and other anxiety-related disorders, caring enough about fame or any pleasure he might derive from it to court it deliberately. He pretty much embodies anhedonia. But one of the few positive emotions he does admit to is appreciation, even awe, of canonically good writing, and his own prose often reaches similar levels. As Jeff Vandermeer, no mean scribe himself, says in his introduction to the new Penguin Classics volume, Ligotti’s “unique way of seeing the world” is “transformative” and “cannot be emulated in any meaningful way and ferociously resists commodification by the marketplace.” And if only optimistic, positive, life-affirming writers are to be admitted to the halls of fame, well, someone really should have told the Nobel Prize committee before they approached Samuel Beckett, or even Shakespeare before he wrote Macbeth.

Let’s leave the last word to Ligotti himself, courtesy of the WSJ interview: “I’m hopeful that my work will reach the right audiences, what I called ‘sympathetic organisms’ in my story ‘Severini.’ Unfortunately, those individuals did not come to a pleasant end. Who does?”