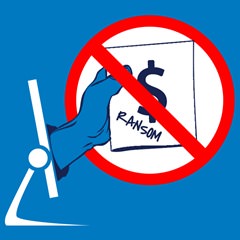 If you needed another object lesson about the dangers of installing software from unapproved sources, you just got one. The Register reports that a security firm has discovered an unsavory ransomware app that, under the auspices of being a pornography player, uses your phone or tablet’s camera to take a picture of you and then locks up your device so you can’t use it, even after rebooting, and threatens to send your picture to your friends if you don’t fork over $500.

We can draw a few conclusions from this. First of all, software from unapproved sources is often a bad idea. Sometimes you basically have to use it, as with the mobile ad-blockers Google won’t allow onto its store, or other apps from unapproved categories. But installing an app for risqué purposes like watching porn? Bad idea. If you’re going to install an unapproved APK file, make darned sure it’s coming from somewhere you can trust not to hold your photo and your device for ransom. (Or run it on something like the Nook HD, which doesn’t have a camera at all!)

Though if we take that conclusion and turn it around, we can also wonder if it’s really a good idea for Google to block as many types of apps from appearing in its store as it does, such as ad-blockers. On the whole, it seems as though it would make for a better user experience for Google to let them in where it could keep an eye on them rather than forcing its users venture out into risky territory.

In any event, whatever you say about ransomware magnates, at least you can’t say they’re not inventive.