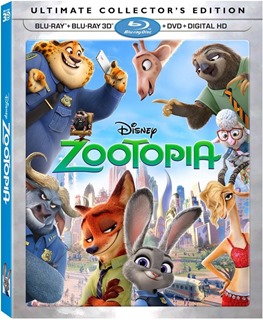 Today I noticed a way in which the Big 5 print publishers are falling behind some companies in the movie industry. Strange as it is to say about a company that’s done so much harm to the state of the public domain by championing copyright extension legislation, the exemplar in this case is actually Walt Disney.

Today my copy of the Zootopia Ultimate Collector’s Edition Blu-ray arrived. The noteworthy thing here is that Disney movies come with a “Magic Code” that you use to redeem digital copies of the movie via Disney Movies Anywhere—much as with Ultraviolet copies of Blu-rays from other studios. But unlike most Ultraviolet copies, Disney Movies Anywhere actually links your movie purchases to multiple other online streaming or download services: iTunes, Amazon Video, VUDU, Google Play, and Microsoft. 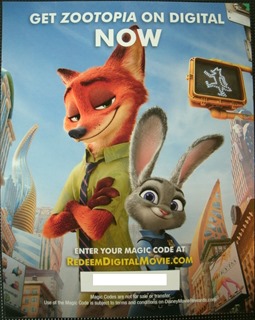 So, no matter whether you have an Android, iOS, Windows, or even an Amazon Fire device, you just buy a Disney DVD and you’ve got a streaming or downloadable copy of your movie in all those places. I just finished downloading a 1.9 GB high-definition copy of the movie to my Nexus 7 tablet, and it plays beautifully. I checked on my Fire, and the Amazon Instant Video app has it right there in My Library for streaming or device download. (The version of the video on Amazon is 3 hours, 37 minutes long, because it includes the feature plus all the featurettes and deleted scenes tagged on the end!)

All that, for just the cost of the Blu-ray. Which I also still have, in case all those streaming services should decide to shut down. 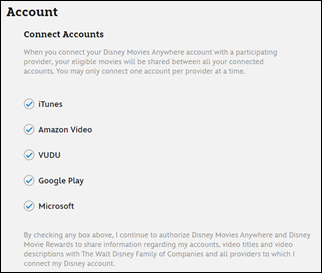 So, what if you bought a print book and got the e-book version automatically? (Well, you don’t get that yet, though Shelfie will at least get you an e-book discount for owning the physical book with many titles.) But even that’s not going as far as Disney is with its movies.

What if you bought a print book and automatically got the e-book for Kindle, Nook, Kobo, iBooks, Adobe ADEPT, and every other possible e-book provider, all at once? You certainly don’t when you buy a printed book, but that’s the equivalent to what Disney is doing here with its physical movie discs. If you tried to get the movie on all those different services without buying the disc, you’d have to buy it separately at each one—which would cost a lot more than just buying the Blu-ray once. 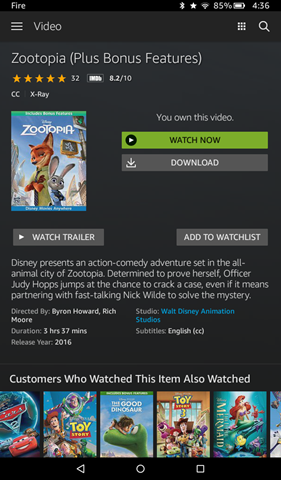 Disney’s far from the only studio that provides free digital copies, though it’s about the only one that provides them so freely in multiple formats. The only movies I have on my Microsoft account are Disney/Marvel titles that came from Movies Anywhere. My Google Play account has a few extras—a couple of my Ultraviolet titles were apparently also provided here, plus a couple of freebies Google gave me of its own volition. (I don’t even remember when or how I got the Sandra Bullock movie Gravity. I don’t own that one on disc.) Same for Amazon. Vudu has all my basic Ultraviolet stuff, which include the Disney Movies Anywhere titles plus a number of others—22 movies in all.

While these movies are all encumbered with DRM, they have down the basic trick of being useful enough that you hardly even notice the DRM that Amazon also has with its Kindle titles. And effectively all the different providers (with the possible exception of iTunes) allow you to stream these movies from the web or download them to your device for offline viewing.

It’s not even the only digital medium to do this. Amazon will “autorip” CDs you buy from them, giving you access to the music files before you even receive the disc.

But the Big Five publishers have historically been reluctant to go even a centimeter farther than they had to toward giving customers extra access to content. Back in the days of Fictionwise, the publishers wouldn’t even permit multi-format downloads of DRM-locked e-books from the same e-book store, because each format was considered a separate “edition” of the book, like paperback, hardcover, and so on, and had to be paid for separately! And that kind of perspective isn’t limited just to publishers. When Stephen King launched his digital serial The Plant, he insisted each separate download had to be bought separately, too. That probably helped contribute to the project’s “failure”. 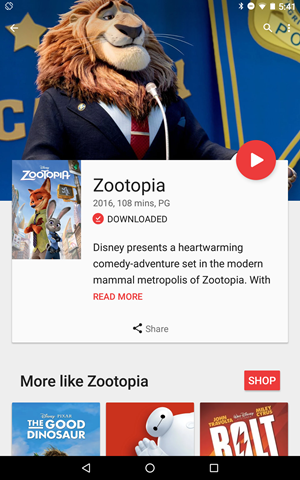 Perhaps publishers and old-school authors are so used to thinking in terms of different editions selling separately that it handicaps them from seeing that they could add significant value to their physical media by bundling the digital media with it. For example, I will rarely buy Disney or Marvel movies used anymore, because I value getting the digital versions that come with the new discs so much. If I could get the e-book free with the print book, I might just start buying more print books. (Especially since they tend to cost less than the e-book version on Amazon. Some people already buy this way for CDs that cost less than buying the digital album by itself.)

What if there were a way to offer something like this for print-on-demand self-published titles? Buy the print-on-demand book and get a copy of the e-book free? Given that self-publishing folks might not be so keenly tied to the idea of charging separately for everything, it could provide even more reason for consumers to buy their books over the Big Five’s. It just remains for some company to figure out how to offer that service.

In any event, remaining stuck on separate formats like this can’t be helping the book industry compete with the movie industry for people’s eyeballs and people’s dollars. It just feels like you’re getting more when you buy a Disney Blu-ray. You don’t have to worry that it won’t work on whatever device you own or service you use, even if you switch up operating systems. All because Disney’s not hung up on forcing people to re-buy their media for multiple platforms.