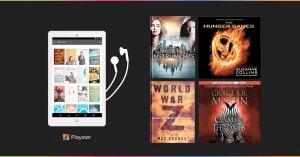 Books are currently Hollywood’s biggest trend. In 2015, 55% of Hollywood movies were based on a book—more than double that of the previous year. The trend is bleeding into the world of television, too, and depending on the popularity and success of a screen adaptation, books can generate further forms of cultural production, from audiobooks, to video games, to toys and other merchandise. We’ve picked out a list of five influential books that have been translated into new experiences on and off-screen for readers and nonreaders alike.

J.K. Rowling’s enormously successful Harry Potter series is influential in so many ways. Rowling is the world’s first billionaire writer. Her novels launched the careers of Daniel Radcliffe and Emma Watson. Harry Potter is iconic, and made lifelong readers out of so many people. With eight film tie-ins (and a ninth on the way with Fantastic Beasts and Where to Find Them), the upcoming Harry Potter and The Cursed Child play and script publication, a fan-oriented website exploring the series’ untold mysteries (Pottermore), an audiobook version narrated by Stephen Fry, and countless merchandise from toys, to clothes, to video games. Harry Potter has become more than a book series: it’s a cultural phenomenon to be enjoyed whether you’re a reader or not.

The Hunger Games by Suzanne Collins

Suzanne Collins’ Hunger Games trilogy is one of the most talked-about book series on the planet, and for good reason. Praised for its fast-paced action and page-turning quality, the trilogy was ripe for a film adaptation, and the four Hunger Games movies have grossed almost $3 billion worldwide. With an audiobook version available and even a video game and a theme park rumored to be in the works, The Hunger Games is a great example of how books can be translated into new, unique experiences. Like Harry Potter, The Hunger Games is an enormously influential series that generated huge amounts of interest in the young adult genre and got loads of people reading.

The Mortal Instruments by Cassandra Clare

You probably know Cassandra Clare’s Mortal Instruments in one form or another. The hit book series is currently running on teen TV network Freeform under the title Shadowhunters, following a less-than-successful attempt at a film adaptation. Despite the film flopping, the TV show offers an interesting take on the eternal struggle between Heaven and Hell, packing in every otherworldly fantasy being you can imagine into a humorous and decidedly millennial setting. Th3rd World Publishing released graphic novel and manga editions of The Mortal Instruments, and it’s also available as an audiobook, ensuring it reaches as wide a readership as possible.

A Song of Ice and Fire by George R. R. Martin

The first book of George R. R. Martin’s infamously bloody high fantasy series came out way back in ‘96, but the majority of Westerros’ fans only became acquainted when it premiered on HBO as Game of Thrones in 2011. The Emmy award-winning series is now going into its sixth season, and, interestingly, is going beyond the books’ current story arc, to the chagrin of many of GRRM’s readers. A Song of Ice and Fire has been adapted into endless forms of entertainment—you can enjoy the series on audiobook, experience it a whole new way as a video game from Telltale, or play board and card games inspired by the series.

World War Z is another great example of a book turned into a multimedia experience. World War Z might seem like yet another zombie apocalypse narrative, but this book—told in the form of testimonies from people around the globe—smartly examines whether our UN-led world could actually handle such a catastrophe. The Audie Award-winning audiobook version featured blockbuster performances from actors like Alan Alda (M.A.S.H.), Mark Hamill (Star Wars), John Turturro (The Big Lebowski) and more, and is a great example of the medium’s potential. It even spawned a film version starring Brad Pitt, which, if anything, proves that books are always better…

So where do we go from here?

As popular books continue to inspire multimedia spinoffs, it makes sense for streaming services to remarket across media types and push more relevant content to users.Playster is currently the only online media service to do this in any significant and collected way, offering movies, games, music, books, comic books and audiobooks with a single subscription to its service. You could argue that Amazon also offers significant multimedia potential, but as a platform it involves a mix of brands and individual transactions that distance it from the unified customer experience you get with Playster. As books continue to inspire other media adaptations, this could give digital multimedia services like Playster the edge in catering to die-hard fans seeking a franchise experience that’s truly complete.