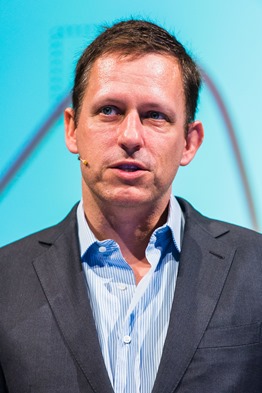 Donald Trump—he who has incited violence at his rallies—isn’t the only billionaire thug in the news.

Peter Thiel (photo), the Silicon Valley investor, took umbrage when the Gawker site called him gay, a fact already widely known in his circles despite the impression the Gawker story may have given. The upshot was that he quietly financed law suits against Gawker. The site’s parent company has filed for Chapter 11 bankruptcy, and Wired says it’s doubtful that Gawker itself will survive (although owner Nick Denton certainly hopes that it will).

The news here for newspapers and Web sites—and for writers and publishers of investigative books, as well as romans a clef—is not good. Thiel in effect is encouraging other thin-skinned moguls to beat down anyone who makes trouble. Now, consider that The Donald once himself sued a book writer and publisher for $5 billion in damages and has called for more plaintiff-friendly libel laws. Simply put, writers and publishers of all media should heed Wired’s warning and not rejoice over Gawker’s plight, even if its journalism at times has been unsavory. That’s the price we pay for a free press.

How to discourage billionaires’ assaults against free speech in the future? I hope that legislators in states across the U.S. will think about legal remedies. A little too optimistic? Of course I am. But sooner or later, especially if mass hatred of Republican Presidential candidate Trump drags down enough troglodytic politicians in November, the political tides will change at all levels of government.

I’m not a lawyer, but I wonder if one good precedent might be anti-SLAPP legislation, discussed on the site of the Reporters Committee for Freedom of the Press.

SLAPP means strategic lawsuits against public participation, in which businesses file frivolous lawsuits against their critics—not in expectation of victory, but rather to scare off foes. If under the anti-SLAPP laws a defendant can then prove that a business’s real goal was to undermine free speech on a matter of interest to the public, then he or she may collect attorney’s fees from the plaintiff.

Mind you, the public interest counts in the case of anti-SLAPP laws. However much I loathe Thiel’s thuggish actions, Gawker’s delving into his personal life probably would not be in that territory; if nothing else keep in mind that the anti-Gawker suit was a privacy one, not a libel one. So the remedy I’m proposing most likely would not apply to bullies in situations precisely like the Thiel exploited through his financing. But I do love the idea of in some ways discouraging the mega-rich’s subsidization of third-party lawsuits to silence foes speaking out on matters of public interest or potential public interest.

If nothing else, wouldn’t it be wonderful if, just as in the case of political financing, we set limits on how much the megarich could each spend each year on their assaults against the First Amendment via third-party suits? The lower the limits, the better! At the least, why not mandate disclosure of financing of individual suits?

For now, the best of luck to Gawker in overturning the verdict against it in the Hulk Hogan case that Thiel financed.

Related: Stories from Politico and CNN. Freedom of speech fans might also check out New York Times socks writers $1,884 for quoting fewer than 300 words: ‘All the news that’s fit to gouge for’?