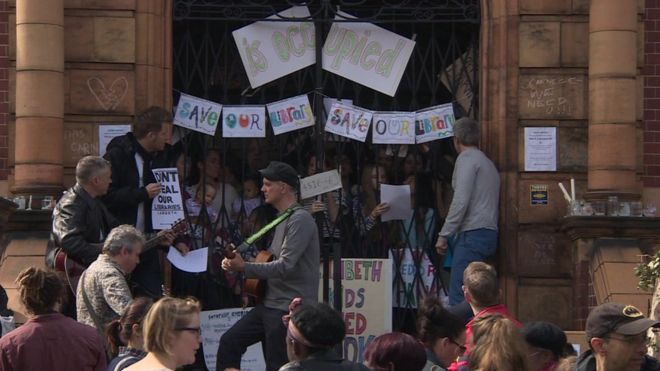 Andrew Carnegie‘s legacy of supporting public education and literacy is getting a late refresh in London. Carnegie Library in Herne Hill, Lambeth, was slated for closure on April 1st, as part of cost-cutting moves by Lambeth Council. However, protestors have now occupied the library and are acting as a beacon for the broader movement against library shutdowns in the UK. Even the Financial Times is covering the story in detail, quoting Carnegie’s own words that “a library outranks any other one thing a community can do to benefit its people.”

The Lambeth Council’s own information page on the library states that: “Carnegie Library is close to Denmark Hill and Herne Hill, and is a picturesque Grade II listed building. It closes on 31st March 2016 and it will reopen in 2017 as a healthy living centre with a self-service neighbourhood library.” However, according to the FT, the library is “caught up in plans to trim £4 million [$5.7 million] from the council’s leisure budget. It is slated to become a gym with an unknown number of bookshelves.”

The UK Society of Authors Tweeted the above image of the occupation, urging library users everywhere to “Stick up for your local library!” Voluminous other statements of support have gone out under the hashtag #carnegieoccupation and from the Save Our Libraries – Lambeth Facebook page. Local councillors have been publicly rebuked for their less-than-committed response to the campaign.

At end March 2016, the UK’s Chartered Institute of Library and Information Professionals (CILIP) shared a BBC dataset showing the “extent of losses to public library services and paid staff since 2010” in the UK. According to this, “almost 8,000 jobs in UK public libraries have disappeared in six years and 343 libraries have closed, with over 15,000 volunteers recruited to the library service.” CILIP Chief Executive Nick Poole stated that the figures: “demonstrate again the damage caused by hastily implemented austerity and devolution policies without a robust strategic plan for libraries.”