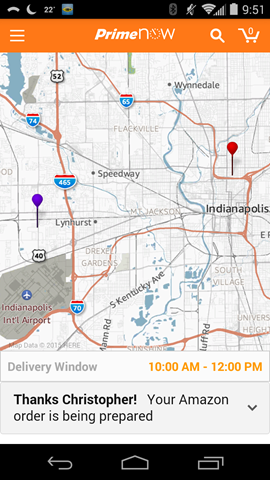 In the middle of the night, my cats informed me that their feeder had run out of dry cat food—and I knew I’d just emptied the bag a few days ago. This would ordinarily mean taking a trip out to buy more food and cart it home. The problem was, it was twenty degrees (Fahrenheit) out, and I didn’t want to go out in that. As I woke up, I pondered the problem with my still-foggy mind, and settled upon a solution: I’d try Amazon Prime Now again. After all, they had one bag of the brand of cat food I normally used last time I ordered from them, and if nothing else that would keep me from having to venture out into the cold to get cat food for a few more days. So I reached for my smartphone (plugged in and lying on the mattress next to my head) and placed my order without even getting out of bed.

I was in for some pleasant surprises. For starters, they had a lot more Iam’s cat food available now, in different sizes and varieties. The prices weren’t bad, either—certainly no worse than I’d see at the local Wal-Mart. I settled on a 9.2 lb bag of “IAMS PROACTIVE HEALTH Adult Multi-Cat Complete Chicken and Salmon Recipe Dry Cat Food” for $17.97 and added it to my order.

Then, out of curiosity, I started browsing some other categories of bulky, heavy items. They had my brand of cat litter (Fresh Step, scoopable, 25 lbs, $12.99), so I added that to the cart. I’m about out of toilet paper, and didn’t want to have to make another trip to replenish that, so I selected a 12-count package of Cottonelle Big Rolls for $9.99. A box of Kleenex and some cans of Friskies on special completed the order. Then I noticed Amazon was offering a free 12-pack of soda with a coupon code, so what the heck, I added some Mountain Dew, too. In the end, my order came to about $53, including a $5 tip but no delivery fee.

I placed my order at 9:20, with delivery scheduled between 10 a.m. and noon. The app showed me a map view of Indianapolis, with my driver parked at Amazon’s warehouse out by the airport, and me in my home just north of the downtown area. And then I got up, got dressed, and waited.

As with the last time, I had to refresh the app whenever I wanted a new view of where my driver was. I saw him travel through the downtown area, making deliveries, and finally head up toward where I was. In fact, I saw him right as he arrived at my building and was able to go down and greet him as he got out of the van and brought out my purchases. The big and heavy items were unbagged, though the Mountain Dew had an Amazon Prime-branded tape carry loop wrapped around it. The Kleenex and the canned cat food came in another one of those Prime Now grocery bags.

Unlike the last driver, he actually did come around to the back door where my apartment is situated, as I had specified in the delivery instructions. When I complimented him on this, he explained that he makes a point of reading the special instructions on his deliveries.

So, I ended up with some of the more annoyingly bulky/heavy items on my normal grocery list delivered to me, and didn’t pay a lot more than I would have to get them at the grocery store. A $5 tip, yes, but that’s on par with what I might have paid for renting a BlueIndy car to drive the groceries back—and that would have involved me having to get up, get dressed, go down to the grocery store in the 20-degree weather, do the actual shopping, then pack it in a BlueIndy car, drive it back, and unload it. And then, assuming I originally got to the grocery store by bicycle, then I’d have to drive the BlueIndy car back and ride my bicycle home.

I was accustomed to the idea of having to pay a premium for convenience to have groceries delivered. I just never thought it would be such a small premium. Even the $5 tip was nicely counterbalanced by the free 12-pack of Mountain Dew, which was worth just about that much.

And it’s not just for groceries, by any means. The Prime Now catalog has a pretty good selection of all sorts of items Amazon offers. The only thing I’m not too impressed with is the way you can only browse and order via the Prime Now mobile app. The small screen of a smartphone is not necessarily the best for complicated store searches, and the items didn’t seem to be arranged in any particular order. Fortunately, most of the things I searched only brought up a dozen results or so, but still, that was quite a few to scroll through.

According to the Amazon Prime Now homepage, Amazon is offering free 2-hour delivery “on gifts, groceries & more” until midnight, Christmas Eve. I hadn’t even considered the idea of using the service for Christmas shopping, but you know what? If the gift you want is on Amazom Prime Now, you’re in one of the areas where the service is offered, and you’re a member of Amazon Prime, then paying a moderate tip to have it available within a couple of hours would sure beat paying about the same amount to get it delivered the next day.

I really don’t want to sound like I’m just shamelessly plugging the service, especially since TeleRead does use an affiliate link for Amazon purchases, but I’m simply amazed at how amazingly fast and convenient it is. You try something like this, you start to believe that maybe Amazon could figure out a way to get packages to you with a fleet of drones. Of course, the service does have its limitations—most notably, the limitation of only being available in a handful of metropolitan areas, rather than in every city in every state.

For all that Amazon is trying to extend its reach with its own delivery, ground shipping, and even air shipping services, building that kind of physical network takes a lot of time and effort. There’s a reason we have only a few parcel delivery services, rather than every company having its own. Most companies just aren’t big enough to feel the need to bother. But Amazon is actually getting there, little by little—and so it’s starting to bother, little by little. That’s honestly amazing—and if you’re one of the entrenched retail or publishing interests that a bigger Amazon could threaten, it’s more than a little scary.

Amazon brings $11 monthly Amazon Prime subscriptions to all US consumers