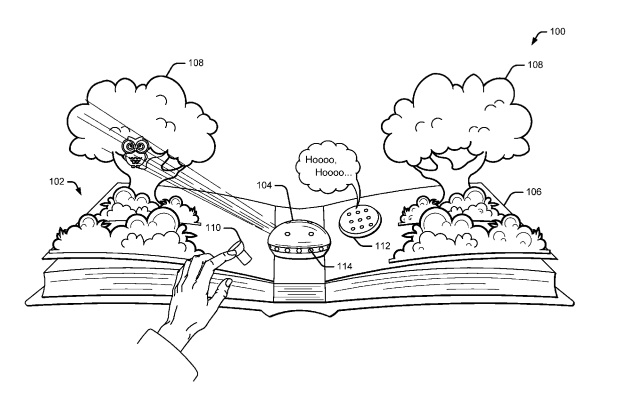 Google has received two new U.S. patents for ebook designs that actually put the “e” in a different place. Both involve digital media interacting with actual physical books. One, for a “storytelling device,” describes a unit with “electronic output components, such as light sources, speakers, a video projector, or a display,” linked to an interactive book and designed to “provide story enhancement effects that are correlated to the interactive book.” The other, for a “media enhanced pop-up book,” outlines a mobile device-linked solution including “a pop-up system configured to cause the pop-up pages to pop-up in front of a display of a computing device as the physical pages are turned. A story controller, implemented at the computing device, detects a pop-up page of the media-enhanced pop-up book when the pop-up page pops-up in front of the display, and presents media content associated with the detected pop-up page on the display.”

For the first of these, Google appears to base its claim for original intellectual property on the grounds that current examples of childrens’ books with inbuilt audio are “not truly integrated … because there is no information exchanged between the book and the audio component.” The Google patent states that “sensors and the electronic output components are integrated into the book itself, such as within physical pages of the interactive book. The interactive book is configured to establish an electronic connection with the storytelling device. When the electronic connection is established, the book data is communicated from the interactive book to the storytelling device.”

The pop-up book patent also concedes that “recently some pop-up books, such as children’s books, may include an audio component that further enriches the experience of reading the pop-up book.” Once again, Google appears to be staking its IP claim on the basis of deeper integration. As well as simply linked images on the mobile device screen, the pop-up book patent outlines cut-outs, or “transparent or semi-transparent portions (e.g., pieces of vellum)” to link the physical pages more deeply with the onscreen images.

As all this indicates, I’m not entirely convinced by the patents’ claims of truly unique IP. For example, I remember already a couple of years ago, in Hungary, using a mobile phone app with my kids, linked to a childrens’ magazine, that displayed 3d images of walking dinosaurs on the mobile phone screen when pointed at some pages of the mag. But it wouldn’t be the first time that the U.S. Patent Office had awarded broad patents on the basis of slender claims to truly original prior art.

Will either design actually revolutionize ebooks or publishing? I doubt it. The wording of both patents suggests that Google may have filed them to defend some media territory rather than to enable immediate production. It’s also interesting that neither appears to draw on Google Cardboard or the search giant’s other moves into virtual reality. But all the same, it may be Google you have to thank in future for literally all-singing all-dancing bells-and-whistles children’s books that further coddle, stifle, and overwhelm your kids’ poor, insufficient, paper-fueled imaginations … 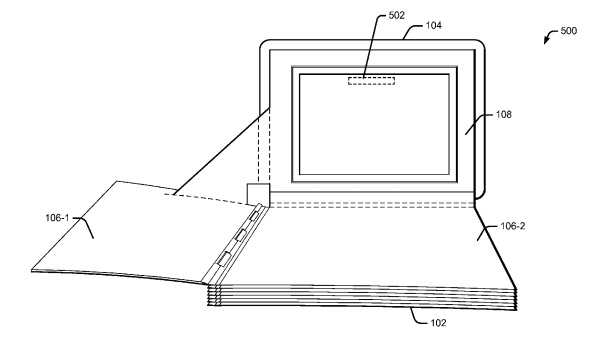