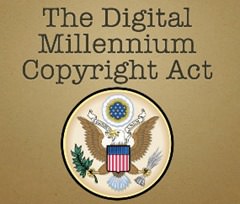 Has there ever been a piece of legislation less loved than the Digital Millennium Copyright Act? We e-book fans dislike it for its anti-circumvention provision, of course—the part of it that makes it illegal to break DRM even if the reason you do it would otherwise be legal. Not that this stops some e-book users from doing it anyway, given that nobody will ever know if they do it in the privacy of their own homes and don’t tell anyone, but it still has a definite chilling effect in terms of keeping the average person from being able to do it easily.

But the far more controversial provision of the DMCA is the “safe harbor” provision. This provision protects websites against being sued over content a user posted as long as the website pulls the material immediately once a rights-holder has complained about it. The user then has to post a counter-notice saying that their content is legit to get it posted again. Civil liberties groups and copyright reform advocates hate this provision, because it frequently gets abused to censor perfectly legitimate material (such as that video of the baby dancing to a Prince song) until such time as the counter-notice can go through, and the provision of it that’s supposed to punish abusers has no teeth.

But it seems that the content providers it’s meant to benefit aren’t terribly fond of it, either. In a Forbes op-ed (found via Ars Technica), RIAA chairman and CEO Cary Sherman complains that the notice-and-takedown system isn’t actually useful:

Copyright law provides a “notice and takedown” system theoretically intended to deal with such theft. In exchange for a legal “safe harbor” from liability, online service providers must deal with instances of theft occurring on their site or network when notified. Unfortunately, while the system worked when isolated incidents of infringement occurred on largely static web pages—as was the case when the law was passed in 1998—it is largely useless in the current world where illegal links that are taken down reappear instantaneously. The result is a never-ending game that is both costly and increasingly pointless.

He also posits that major streaming music distributors are taking advantage of this loophole in notice-and-takedown to force record companies to “accept below-market deals or play that game of whack-a-mole.” That part kind of leaves me puzzled. I know that record companies have been complaining for some time about the level of royalties from Spotify and other such services, but I hadn’t heard about them streaming works without permission and then changing the links when called on it. I wouldn’t think that would even work, given that safe harbor is meant to apply only to users who upload content, not the employees of the service itself. Is he talking about something else?

Or is he talking about YouTube, which has so many people uploading so much content all the time that there’s just no way to sort through it all? Those civil liberties groups and copyright reform advocates I mentioned would note that the RIAA and its members don’t seem to do a terribly good job of making sure they’re even trying to whack the right moles. (That dancing baby matter, in which an appeals court ruled that Universal Music should have considered fair use before sending a takedown notice, is a case in point.)

The DMCA is a compromise, trying to balance the rights of individuals versus the rights of content producers, making it possible for the Internet to function without websites continually getting sued for copyright violation because of something a user posted. As with any compromise, it ends up with nobody really happy. But there doesn’t seem to be a good way to fix that going forward.