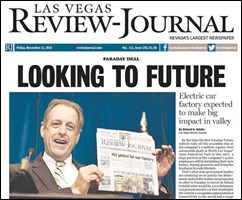 Remember Righthaven? (Or, as I like to think of it, “Rights Haven’t.”) In 2010 and 2011, the company launched a “scorched-earth” campaign to sue people it saw as violating the copyrights of its client newspapers, most notably the Las Vegas Review-Journal. Then it spent the last couple months of 2011 and the first few of 2012 messily dissolving as courts enforced a number of judgments against it to collect the legal fees awarded to the defendants it had sued.

About the only thing Righthaven accomplished was to rack up a rather impressive string of losses in court that provided a number of potentially useful precedents for broadening fair use protections, and potentially weakened newspaper copyright protections. (It did give me grist for an impressive number of stories, however, and a quite satisfactory feeling of schadenfreude as the story progressed.)

As a post-script to the saga, Techdirt reports that the Las Vegas Review-Journal, after changing hands several times, has now wound up owned by a mysterious company that hasn’t even said who its actual owners are, and has reportedly forced the Review-Journal to make changes to an article it published about the sale.

There’s not a whole lot there that’s worth discussing in a digital-literary context, but looking back at how egregious Righthaven’s behavior was back in the day, I can only shake my head and say, “Let that be a lesson to them.” The new digital medium has brought a lot of changes and challenges to the newspaper industry, including making it more difficult to earn revenue. Newspapers can try all sorts of different business models to try to make up for that, such as paywalls. There’s no way to tell what kind of model will work until you try it.

But something that should have been obvious at the outset was that suing the people who are enthusiastic enough about your content to share it on is simply not going to be effective in the long run, or possibly even in the short run. That Righthaven was even able to exist and have its day in court is ample evidence that it actually wasn’t obvious, at least not to the people who had the money to back the string of lawsuits. But it sure ought to be now!

I hope the eventual fate of the main newspaper behind the company will drive the point home to anyone else who might consider doing something similar in the future. It simply won’t work out, and it’s just not worth it in the end.