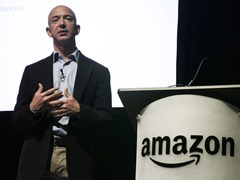 Publishers Weekly is carrying a piece about the American Booksellers Association and Civic Economics releasing a report blaming Amazon for over $1 billion in lost state and local revenue. The trade groups claim that Amazon’s failure to pay sales tax accounts for $625.4 million in lost revenue, and the growth of Amazon and other online retailers has resulted in lowered demand for retail space to the tune of $420 million in lost property taxes.

First of all, where did all that “lost” money go? It didn’t just disappear into the aether, vanishing from the economy forever. It stayed in the pockets of the local consumers, who could and in at least some cases did go on to spend it on something else bought locally that did have sales tax figured in.

But more importantly, I think it’s a little unfair that Amazon gets the blame for what is in actuality an issue endemic to the cobbled-together nature of our sales tax laws. Our sales tax laws were simply not designed for a world in which people could purchase goods from other states so readily, and the problem did not originate with Amazon. In fact, the problem was around for a lot longer than Amazon—as long as mail-order businesses have operated, in fact.

Case in point: my father owned and operated a mail order antique clock part business, the M.L. Shipley Company, from 1983 to 1991. (It’s now part of the Timesavers.com Internet retailer.) I just called him up to ask about it. During that time, he received mail orders from forty-nine of the fifty states, plus a walk-in customer from Alaska. The only orders he was required to collect sales tax on were orders that originated in Missouri, the state in which he was located. (Which probably also included the walk-in customer from Alaska.)

That’s the way the sales tax system was set up. You’re only required to collect state sales tax on orders from places in which you have physical facilities. People who placed out-of-state mail orders were assumed to be virtuously keeping track of how much they spent, so they could tally it up at the end of the year and submit it with their income tax.

Be honest: how many people do you think actually did that? And where were all the complaints about Sears & Roebuck, or L.L. Bean, or whatever other major mail-order retailers existed back in the day, not collecting sales tax for other states? I haven’t done the research to figure out whether actually were any, but even if there were, they can’t have come to anything, because if they had, we wouldn’t be having the same problem all over again with Internet mail-order.

And we are, indeed, having that same problem all over again. It continues that way to this day, in fact. Check out page 4 of Scottsdale, Arizona-based Timesavers’s catalog (PDF, fairly large) and see what it says on the subject of sales tax. “Arizona residents please add 7.95% State Sales Tax or provide your current resale number.” That’s it. That’s all she wrote. By comparison, Amazon now collects sales tax for purchases made in twenty-seven states. You can count them yourself.

The reason for that is, sales tax rates depend not just on the state, but also on the county and municipality. There’s not just one rate for sales tax in any given state—there are dozens, depending on where in the state the business is. (Or, in the case of Internet mail order, where in the state the customer is.) Even if there were only one sales tax rate per state, keeping track of that would be ridiculously complex. As it is now, the only reason you’re able to get 27 states’ worth of sales tax out of Amazon is that it’s big enough to be able to afford an accounting department, and to attract notice from people passing laws saying that companies have to collect sales tax in their state. (I wonder how many of  those states Timesavers should be collecting sales tax for?)

And even Amazon fought having to collect sales tax tooth and nail wherever it could, often shutting down affiliate programs in places like Missouri if a loophole in the law meant they could avoid collecting sales tax there if they did. But that’s entirely its own prerogative, and Missouri probably should have phrased its law better.

So, fine, Amazon accounts for a billion dollars in “lost” revenue. Even if we take that tally at face value, how many billions do you think every other mail-order and Internet-order retailer accounts for? There are thousands of those businesses, ranging in size from sole proprietorships like the Shipley Company up to big corporations like Amazon. The vast majority of them couldn’t afford to keep track of and collect sales tax from other states right now, even if they were required to by law, so they probably don’t.

Heck, even the law that’s supposed to fix all this—the Marketplace Fairness Act of 2015—only requires such businesses to collect sales tax for other states if their revenue in the previous year exceeded $1 million. So even if we get the law passed that will make Amazon sales taxes all better, there will still be millions and millions of dollars in sales tax “lost” because of all the businesses that are too small to be required to collect it. What are the ABA and CE going to do about that?

Also, let’s not forget that this bill is fully supported by Amazon, which wants to collect sales tax everywhere, if the tax rates could just be harmonized to make it simpler. An article about this current iteration of the Marketplace Fairness Act lays it out thus:

But one key company has joined the ranks of supporters in recent years as well: Amazon.

“If they’re going to do real-time deliveries, or same-day deliveries, how do you do that without a physical presence in a lot of places?” Heitkamp said. “So I think that’s why they’re starting to come around on this.”

The article claims that the law is closer than ever before to passing, which, if true, would surely bring some relief to groups like the ABA.

But I think that all the focus on Amazon is doing a disservice to the larger cause. Other big companies, like Google and Apple, have their own tax woes—though not necessarily sales taxes in those cases. But at least they get attention. What about all the other big companies that quietly tick along making sales to all the other states but don’t come under Internet sales tax fire because they’re not controversial like Amazon? Is it really fair to give them a pass just because they’re not Amazon?

If you’re going to attack the problem, attack the whole problem. It’s as if you were only calling out one particular politician for corruption—it’s painfully transparent that the way the system is set up, there are actually going to be a whole lot more guilty parties.