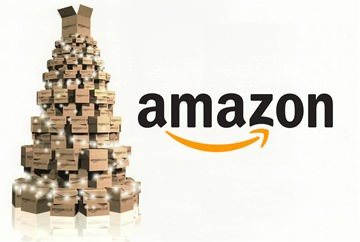 How was your Christmas? Plenty of gifts under the tree? How many of them were either sold or made by Amazon? Odds are, quite a few of them were—at least on average across all our readers and their families. Because in its press release, Amazon says it had a very good Christmas this year.

It’s to be expected, really. Amazon gets bigger and better every year, and sells more and more stuff every year. If it ever has an off year where its sales and revenue go down, well, that will be news. (And Amazon will probably just not mention it in its press release, finding other things to crew about.)

I was over at my brother’s house for Christmas this year, and some members of his wife’s family came over for Christmas—her brother, sister-in-law, and their pre-teen kids. When they opened presents underneath my brother’s tree, I noticed the kids had gotten basic e-ink Kindles, and their mother had gotten a 7” Fire. (I made sure to point them to TeleRead for advice on unlocking it to slip Google Play on.) When I glanced at the kids’ screens, I saw them reading children’s books—the kinds of things with big pictures and only a little text per page. That they were in black and white didn’t seem to bother the kids.

If a similar scene played out under very many Christmas trees across the country—and Amazon’s press release suggests it did—then naturally it was a banner year for them. And the press release seems to bear this out, offering a long list of “Holiday Fun Facts” that incorporate pretty much all aspects of Amazon’s services. More than three million new Amazon Prime subscribers just during the third week of December, more Prime Now deliveries than ever made on Christmas eve, a record number of songs streamed via Prime Music over the holidays, and on and on and on.

There were a lot of items relating to books and e-books, too. The Fire and Echo were the two most-requested and most-gifted items from Amazon wish lists. If put in a straight line in their physical form, all the books kids read as e-books in FreeTime this holiday season would reach to Mt. Everest’s peak more than ten times. The most-purchased Kindle title for 2015 was The Girl on the Train: A Novel by Paula Hawkins, and the most-gifted Kindle book during the holiday season was Rath’s Deception by Piers Platt. The e-book people borrowed most from Kindle Unlimited was No Ordinary Billionaire by J.S. Scott, and the most popular Christmas Day Kindle purchase was The Snow Child: A Novel by Eowyn Ivey. (Isn’t it funny how so many writers feel the need to tell you that their book is “a novel”? As if you couldn’t already tell by other means?)

Whether you like them, hate them, or ambivalent, you have to admit that Amazon has considerably changed the way many of us shop for Christmas, birthday, and other gifts. As for the reasons behind that change, I think that all of the recent programs Amazon has come up with—Prime Now, Prime Pantry, Prime this, Prime that, even the entire idea of Amazon Prime itself—are just window dressing. I think one of the biggest shopping innovations Amazon has ever offered is the simple wish list.

The wish list has made the whole notion of giving gifts so much easier. If you want to do something nice for someone, you just need to search out their Amazon list and there are all the things they’ve said they want. You don’t even have to know their home address, because they can set that up, too. You don’t even have to spoil the surprise that something’s coming. I can and have sent gifts to on-line friends without even knowing what city they live in. Who would have even thought such a thing could be possible before the Internet? (Yes, there were wish lists and gift registries before the Internet, but they tended to be just for single local stores; those usually didn’t have the kind of wide reach that is possible with the Internet.)

It also makes gift-giving easier for friends and family. You can always know exactly what your adult family members want, including things you would never have thought of to get them yourself. If you don’t have any idea what to get your three-year-old niece or nephew, their parents can write out a list of things that are likely to be well-received. Either way, you just go there and place the order, and they end up with a gift a lot more personal than just another gift card. You do have to remember to keep the list updated with your current wishes, but I’ve gotten in the habit of doing that anyway. You can even put e-books on it.

And you don’t even have to shop Amazon to have been affected by this change. It seems like such a simple thing, but it’s been duplicated by any number of sites that sell things, such as Valve’s Steam computer game download store. (And, by the same token, Amazon allows you to add items from other stores to your Amazon wish list.) So many of Amazon’s innovations deal with sending things to people quickly and easily, but it’s the wish list that tells you what they want.

And so many people now are able to avoid the mad Black Friday retail rush, just by staying at home and shopping via Amazon. They can have their gifts sent where they need to go without ever having to leave their homes. That’s added up to a lot less stress and a lot more peace of mind.

Prime members made The Man in the High Castle the most watched TV season on Prime Video this holiday by 4.5x and doubled their total viewing hours of Prime Video titles, compared to 2014

Prime Now has busiest day ever on Christmas Eve – last order delivered at 11:59 p.m. to a customer in San Antonio, Texas

SEATTLE–(BUSINESS WIRE)–(NASDAQ: AMZN) — Amazon’s 21st holiday was a record-breaker for Amazon Prime, Amazon Original Series and Amazon devices. More than three million members worldwide joined Prime during the third week of December, bringing milestone growth to the membership program which offers unlimited Free Two-Day shipping, Free Same-Day Delivery, superfast free two-hour delivery via Prime Now in more than 20 metro areas, and unlimited access to tens of thousands of movies and TV episodes, including award-winning Amazon Original Series at no additional cost. Prime members made The Man in the High Castle the most watched TV season on Prime Video this holiday by 4.5x and doubled their total viewing hours of Prime Video titles, compared to 2014. This holiday was also the best ever for Amazon devices, doubling last year’s record-setting shopping season with millions of devices sold. Among Amazon devices, the all-new Fire tablet was the #1 best-selling, most gifted and most wished-for product across the millions of items available on Amazon.com since its introduction 15 weeks ago.

“This was another great holiday season to be a Prime member, and we welcomed three million new members in the third week of December alone,” said Jeff Bezos, Founder and CEO of Amazon.com. “Over 200 million more items shipped for free with Prime this holiday, and members doubled their viewing hours of Prime Video compared to last year with the Amazon Original Series The Man in the High Castle leading the way as the most watched TV season ever on Prime Video. On behalf of Amazon employees around the world, we wish everyone happy holidays and the very best for the coming year.”