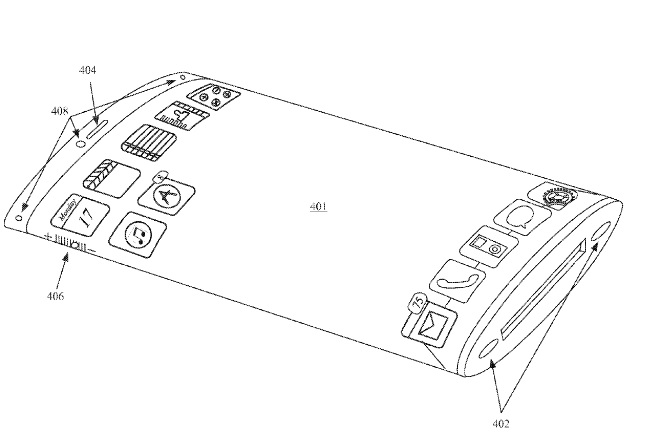 A new patent granted to Apple, widely reported this week, gives Cupertino’s favorite son first dibs on a curved iPhone design that appears to have a completely wraparound curved display. One step up on the Samsung Galaxy Edge, it takes the screen all the way round the device – if the pictures are to be believed, and if the thing ever gets to market. According to the patent, “the flexible display assembly is configured to present visual content at any portion of the transparent housing,” with touchscreen controls, icons, and content displayed according to the device orientation and usage mode.

“A large majority of portable electronic devices have settled into a standard form factor,” runs the patent wording. “Unfortunately, this popular form factor, leaves the sides and rear surfaces of the device unused or at best configured with buttons and switches with fixed location and functionality.”

What the device is and some of its potential should be obvious just from the patent drawings like the one above. From the point of view of e-reading, though, this could be a particularly fruitful form factor. E-books displayed on the back of the device, with the regular phone interface on the front, obviously become feasible – like the YotaPhone2 but with the same display all round. So do e-book pages that use every millimeter of the smartphone surface, with no bezel for the display.

Apple also includes more conventional variants of the same basic principle, including lozenge-shaped devices. But it’s the concept above that really has captured the media’s imagination. Could this present new e-reading scenarios and win Apple back some much-needed innovation kudos? A break from the generic smartphone form factor offered up by virtually every vendor? Lenovo and Samsung are obviously banking on a worldwide appetite for something genuinely new in the smartphone space: Apple, creator of the smartphone in its modern form, may be about to join them. Here’s hoping.