The latest in the excellent Year’s Best Dark Fantasy and Horror series, edited by Paula Guran, does a pretty good job of living up to exaclty what it says on the cover, and pulling together the year’s real best achievements in the genre/genres. Some of the 32 tales will be familiar from elsewhere, especially to an avid dark sider like me, as many have already been anthologized or otherwise put out in book form. That doesn’t change the fact that if you want to get a very broad and compendious perspective on the field – at 576 pages and 32 stories – this is a very good place to begin. Paula Guran did an excellent editorial job with last year’s collection, and this one if anything improves on it.

This is also a very catholic and eclectic collection, with a wide range of subjects and sub-sub-genres on show. Obviously, that’s going to be a big factor in many readers’ enjoyment and preferences among the stories, though it is fair to say that, even allowing for individual tastes and niches within broader genres, most if not all are close to the top of their particular game. There is perhaps a preponderance of cosmic horror, if not actual Lovecraftian tentaculi, but that pretty much reflects ths state of the art right now, and should be anything but a put-off. Conscientious objectors to cosmic horror will probably be off reading dedicated ghost story or vampire fiction anthologies anyway.

That said, there are some straight-down-the-line fantasies here, though very able and intelligent ones. “The Ghost Makers” by Elizabeth Bear is almost good enough to warrant hopes of a new Fafhrd and the Gray Mouser-style story cycle. “Shadows for Silence in the Forests of Hell” by Brandon Sanderson is just pure dark grit. Yoon Ha Lee’s “Iseul’s Lexicon” presents a diffferent kind of highly articulate but straight fantasy. It’s also representative of a welcome strain of ethnic and cultural diversity within the collection – “The Slipway Gray” by Helen Marshall being another fine example, as is the utterly Liverpudlian showing in Peter Atkins’s “Postcards from Abroad” Priya Sharma’s “Rag and Bone.” Sharma’s story also typifies a strong, perhaps post-GFC strain of economic anger and social activism also represented by Veronica Schanoes’s “Phosphorous.”

The collection is not simply garnering brownie points for the culture wars, however. The quality of writing is very high, rising in some instances to the truly outstanding. “To Die for Moonlight” by Sarah Monette is quite simply the best written werewolf story I have ever read, as well as one of the few genuinely scary ones. If you want unsettling dark urban horror, there’s Nathan Ballingrud’s “The Good Husband” or Brian Hodge’s “Let My Smile Be Your Umbrella.” For period pastiche and a nostalgic flavor, there’s Joe R. Lansdale’s “The Gruesome Affair of the Electric Blue Lightning” or Dale Bailey’s “The Creature Recants.” For a hint of steampunk, there’s “The Soul in the Bell Jar” by K. J. Kabza , or “A Little of the Night” by Tanith Lee. And Laird Barron and Neil Gaiman should need no introduction. There’s dark stuff in here for all tastes, and some that you will want much more than a taste of – not least to experience more of the dark flowering that horror and weird fiction are going through at the moment. This is a collection that is often second-hand, but far more often first-rate. Recommended. 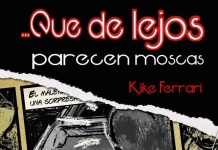