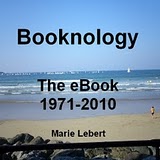 Take a look at Booknology by Marie Lebert and friends. It’s a really neat ebook timeline. You can find it here in English and in French. A Spanish edition is coming in August. Be sure to mouse over the pictures.