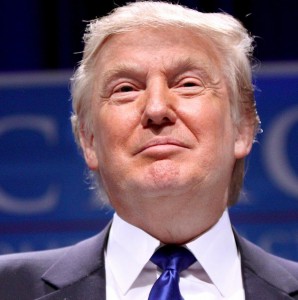 If I were Amazon CEO Jeff Bezos, I’d be toughening up my defenses now against a possible victory by Donald Trump.

No, I’m not talking about campaign donations. Rather I mean the reduction of Amazon’s legal and PR vulnerabilities. E-book-related ones are small in the grand scheme of things. But they could still count—given Trump’s scorched-earth tactics against his biggest foes.

Trump says Amazon has ‘a huge antitrust problem’ is the headline over a news story from Reuters. It’s not the first time Trump has pushed back against Jeff Bezos’s Washington Post for telling the truth about about the now-presumptive GOP Presidential nominee who won’t even release his tax returns.

“This (Washington Post) is owned as a toy by Jeff Bezos, who controls Amazon,” Trump said on Fox New this week. “Amazon is getting away with murder tax-wise. He’s using the Washington Post for power so that the politicians in Washington don’t tax Amazon like they should be taxed.

On top of that, Trump earlier threatened changes in libel laws to make it easier to sue the Washington Post and other media.

Dreadful enough to fret about, however abstract

I know. Your eyes may be rolling, and to an extent with good reason. Pre-dictatorship, at least, a homegrown Mussolini couldn’t suddenly will new libel laws across the U.S. We’re talking about possibilities rather than probabilities. But as I’ve written before, a Trump victory is like nuclear war—a mercifully abstract horror right now, but one so dreadful we still need to fret about it.

Troubling uncertainties, moreover, are indeed ahead. What if terrorists decide they’d be better off with Dangerous Donald in office to do their job for them—throwing the U.S. into chaos with his wacky economics and war against Hispanics and certain other minorities? An attack to influence the election? The Iranian hostage crisis was among the big reasons why Jimmy Carter lost to Ronald Reagan. Keep in mind, too, that the FBI is still investigating the problematic e-mail server that Hillary Clinton’s people ran while she was secretary of state. Probably the anticipated Democratic presidential candidate will get off. But we don’t know.

So what are the e-book angles if Trump does win? Well, if conventional legal thinkers are right, Amazon is beyond antitrust law in the e-book area. “The given wisdom is that you have a monopoly if you’re in the 70 percent to 90 percent range,” The Seattle Times has quoted Herb Hovenkamp, an anti-trust expert at the University of Iowa. Havenkamp cites the high percentage as an obstacle. But wait! Amazon as of last October accounted for “74% of all US ebook purchases and 71% of all US consumer dollars spent on ebooks” if you include titles without ISBNs, according to our friends at Author Earnings. And who knows? The percentage by now may be even higher.

That still leaves another barrier. Having a monopoly isn’t itself not illegal, says Havenkamp, just so the company obtained it lawfully and avoided tactics such as predatory pricing.

But how about other forms of “predatory”? This is where it could get tricky. Amazon has adamantly refused to offer ePub capability in its Kindles. It has used its proprietary formats and proprietary DRM to lock in customers, especially those who own Kindle hardware and have already invested thousands in Kindle books. The results of this are oppressive and patently harmful to consumers. Built up a big Kindle library, own a recent E Ink Kindle and want text to speech? Amazon has gone out of its way to make TTS a lot more of a hassle than it should be for the nonblind, as I know first-hand from having set up my Kindle Oasis to read aloud to me.

Similarly, Trump’s Justice Department could try to depict Jeff Bezos as himself having acted like a private-sector Mussolini in regard to the issue of an all-text bold option, despite the presence of a font-weight slider in the rival Kobo. In a more competitive market, Bezos might well show more sensitivity to the needs of millions older Americans with contrast sensitivity issues. Amazon could counter that B&N’s E Ink machines also lacks an all-text bold option. But Amazon, not B&N, is the one with more than 70 percent of the e-book market.

These issues may seem arcane. But we need to consider the Il Duce factor. If President Trump proclaims an issue to be important, then his sycophants in the media and elsewhere will consider it so, and even pre-Trump appointees in the judiciary may take notice. Yes, sycophants will abound in this era of “access journalism” simply because Trump is President.

Now flash ahead to mid-2017. The terrorists haven’t yet detonated a dirty nuke in Washington, but President Trump himself has gone nuclear against Bezos. Trump is giving a press conference at the White House. Beside him sits a 68-year-old grandmother with white hair and shriveled arthritic hands.

“Ladies and gentleman, I want you to meet my friend Mary from the Queens. Mary once was a devoted reader of books on her Kindle.” The Donald turns to Mary. “Tell us why you can’t enjoy your favorite annotated Bible as much as you used to.”

“The words,” Mary says in a quavering voice. “I can’t see them the way I could. They don’t stand out well enough against the background. My eyes are shot, and they just keep getting worse. I’m not blind. But looks like I will be, and I’d like to enjoy my books as best I can, while I can.

“Tell us what your nephew did,” The Donald prompts her.

“Eddy went on the Internet and found that I could read my Bible if the words were in something called boldface.”

“So your nephew complained to Amazon?”

Mary nods. “Eddy told ’em another machine called a Kobo could give me boldface. Why can’t my Kindle?”

“And did he get anywhere?”

Mary shakes her head. “Mr. President, they couldn’t care less. Please. Give me back my Kindle Bible. My hands are too weak to hold a paper book. And it isn’t just the Bible. How about my other books? I’m all Amazon. I can’t afford to switch.”

“Well today, Mary,” Trump says, “my attorney general is going to do something about this. We’re going to give Amazon such troubles. Today we’re launching an anti-trust suit to make it harder for Amazon to ignore you and other customers. You want your boldface? Well, The Donald’s on the case.”

“By the time we’re done, there might not even be an Amazon—all the trouble they’re in for. But don’t worry, Mary. You’ll be able to read every book you own in boldface on the new Kobo I’ll buy for you.”

I hope my point comes through. Like Nate Hoffelder at the Digital Reader, I would find it abhorrent for Trump to use Amazon to go after the Washington Post. Unlike Trump, I want Amazon to thrive along with others in the e-book world. One way for Amazon to survive the possible Trump presidency is to do what the company normally does best—serve the customer.

Among other things, that means ditching proprietary formats, encouraging publishers to drop encryption-based proprietary DRM, and no longer so blithely ignoring still-sighted customers who want the all-text bold option. Come on, Jeff. I’m still rooting for you to do the right thing. If along the way you can add extra Trump-proofing, then so much the better.