As per my earlier report on the Charlie Hebdo massacre, other commentators have been picking up on the coincidental timing of the attack with the publication of Michel Houellebecq’s new novel Soumission (Submission), with its (to say the least) controversial portrayal of a near-future Islamicized France. Al Jazeera is just one, rounding up the responses of Houellebecq himself and of other sources inside and outside France. Germany’s Frankfurter Allgemeine Zeitung, for instance, labeled the novel a “provocation,” and expressed the hope that members of the local PEGIDA anti-Islamic movement are “not interested in French novels,” because they could feel “vindicated in their dumb resentment” by it.

As it happens, the latest issue of Charlie Hebdo published at the time of the attack showed what the magazine itself thought of the book and of Houellebecq. Starring on the cover under the headline, “The Predictions of Mage Houellebecq,” the Houellebecq caricature declares “In 2015, I’ll lose my teeth,” and “In 2022, I’ll celebrate Ramadan!”

Asked on broadcaster France 2 to respond to charges that he was feeding the Front National and Islamophobia with the novel, Houellebecq declared: Other things change the course of history: essays, the manifesto of the Communist Party, but not novels.” However, he went on to say that “I won’t avoid a subject just because I know it’s controversial,” and, in words that will hardly reassure anyone alarmed by the novel’s vision of a France converted wholesale to Islam, “it’s not radical Islam in the book … rather, it’s one of the gentlest variants imaginable. ”

One of the many other bitter ironies of the attack is that one of the policemen who died, Ahmed Merabet, was himself a French Muslim, underlining the fact that moderate Islam as well as free speech and France were victims of the attack. But if Houellebecq isn’t exactly jumping up from the Judas seat as a stalwart defender of tolerance and Western secular traditions – except in so far as they facilitate his own work – others are. France Télévisions, Le Monde.fr and Groupe Radio France have offered their material and human resources “so that Charlie Hebdo can continue to exist.” Besides the global ‪#‎JeSuisCharlie‬ demos, Banksy has already portrayed what he feels about the affair – see below. And one of Charlie Hebdo’s former journalists has declared: “We have all decided, the journalists who survived and their ex-colleagues, that we are going to have a meeting tomorrow to publish the next Charlie Hebdo, because there is no way, even if they killed 10 of us, that the newspaper won’t be out next week.” Free speech, like Islam, has its martyrs. 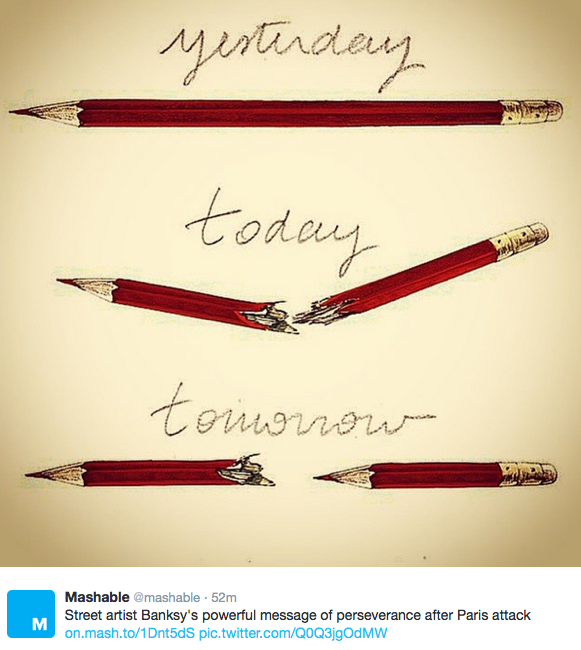 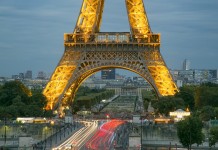 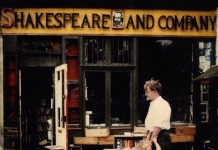