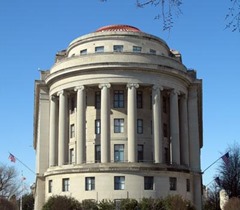 A news story has been making the rounds lately that the FTC has won a ruling against Amazon in a 2014 lawsuit, determining that the e-commerce giant didn’t take appropriate measures to prevent unauthorized in-app purchases by children. The FTC already reached out-of-court settlements with Apple and Google for $30 million and $19 million respectively, but apparently Amazon decided to fight it out—though at the same time it changed the way in-app purchases work to make it harder for them to happen by accident, including a parental lockout.

Perhaps the most interesting thing about the ruling, though, is that whoever redacted the decision for release messed up—despite the black bars over large swaths of text, the release could be read in full by copying and pasting the text into another document. It’s unclear exactly why they tried to redact so much, as most of the redactions seem like things the public really ought to know about. Techdirt has a detailed rundown on exactly what the FTC and/or Amazon didn’t want us to know, and it’s pretty fascinating reading.

Effectively, Amazon was aware the general public didn’t understand in-app purchases very well, and could be easily confused by “free” apps that nonetheless offered such purchases.

Amazon was aware that in many instances, the person initiating the in-app purchase was a child: in a document discussing company strategy to promote increases in in-app purchasing, Amazon acknowledged “the disconnect between the account owner (e.g., parent) and the app user (e.g., child).”

And Amazon’s official policy that digital purchases couldn’t be refunded would discourage customers from seeking refunds.

Also redacted were the FTC’s rationale for determining how much harm had been done to consumers, Amazon’s arguments against it, and the court’s partial agreement with Amazon—and the fact that the FTC felt Amazon should remain under government supervision for 20 years, which seems a trifle excessive. Apple certainly didn’t get twenty years of supervision for scheming up agency pricing, which cost consumers a lot more money overall than in-app purchases.

The FTC’s expert estimated the injury to consumers at $26 million, but the judge will assess damages against Amazon at a later date. Given that Amazon fought rather than settled, it will probably be on the hook for more than Apple or Google, but we’ll see.

Amazon’s behavior here is troubling (though the developers of the apps aren’t exactly blameless, either), but legal experts point out that it’s not something unique to Amazon from those days—as the settlements with Apple and Google demonstrate.

The decision, like the enforcement actions against Apple and Google, stemmed from a time when the industry engaged in questionable in-app billing practices, says Internet law expert Eric Goldman, a professor at Santa Clara University.

“The good news is we’ve moved on,” he says, adding that the major companies today don’t appear to be “engaged in such trickery to get in-app purchases.”

But it’s just as troubling that the court felt the need to try to redact so much. There’s some stuff here that would be embarrassing to Amazon, sure, but there aren’t any big trade secrets, and the ruling is a matter of public interest given that it was the public who was being harmed by kids’ in-app purchases.

In any event, in-app purchases are much easier to deal with now, and parents have lock-out functions that prevent kids from making them. Assuming the settlement goes through, this should end another chapter in the history of mobile technology.