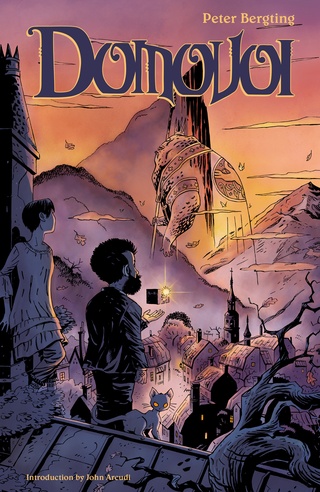 While in Sweden, I got in touch with local comic artist Peter Bergting. As per his official bio, Peter Bergting “has written four young adult novels in Swedish for a major publisher (Bokförlaget Semic), three American English, graphic novels (for Image Comics and Dark Horse Comics) as well as numerous short stories, reviews and editorials in both Swedish and English. Peter is published in the US, Sweden, Norway, Spain, France, Germany, Denmark, and Italy.” His most familiar work for U.S. readers will probably be his work with Dark Horse, especially for Mike Mignola’s Baltimore series, and his own original Stockholm-based comic novel Domovoi.

TeleRead: What’s your view of the current comics scene in Sweden, both in terms of the talent on view and support from publishers and the cultural establishment?

Peter Bergting: The current scene is fantastic but tilted towards autobiographical comics and political comics. Sweden has a large scene, with female creators currently enjoying great success bringing in tons of new readers who otherwise wouldn’t have picked up a comic book or graphic novel. The adventure/fantasy genre is still a bit frowned upon and not taken as seriously. That’s something that needs to change, since there are many young creators out there who are on the verge of becoming comic book artists but will never get the recognition they deserve or even get published.

TeleRead: How have you found working with the American comics scene, both in gaining recognition, and in cooperating once the links are established?

Peter Bergting: I started out in the U.S. with my first book being published by Image. That led to a run on Strange Girl and then three graphic novels for IDW. During that time, I managed to get only one book published in Sweden, and only because the author was super-famous over here. It went on to become my biggest hit, so I’m grateful for it, but it was lightning in a bottle. Cooperation for me is mostly saying thanks but no thanks to writers who want to cooperate. There are some great stories floating around out there, but Baltimore takes up at least 50% of my time and if I can find the time I need to work on my own stuff. That said, I LOVE working with everyone at Dark Horse.

TeleRead: Where is the most meeting of minds between Swedish (or European) and American comics, and what just doesn’t travel?

Peter Bergting: That depends on what comics you are reading. If you’re a little bit older you’ve probably grown up reading American and to some extent Belgian comics. Younger creators have grown up with webcomics and manga and are much more personal and expressionistic with their creations.

TeleRead: What technology do you use, and how important is it to your creative process?

Peter Bergting: I currently use three Wacom Cintiqs, a 13-inch, a 20-inch and a 24-inch, depending on where I am. Added to that I have a Mac Mini from 2011 and a MacBook Pro. I do all my work on these setups and hardly even touch paper any more. Many comic book artists have stopped inking traditionally, and it saves so much time. I use a really rough custom-made brush that looks exactly like my inked lines, so the end result is identical.