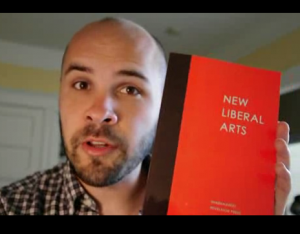 “‘Mr. Penumbra’s 24-Hour Bookstore’ is a story about a young man who loses his job as part of the Great Recession of the early part of the 21st century, and gets a new one working a night-shift at a 24-hour bookstore in San Francisco. He quickly discovers that there’s much more than meets the eye to this store. And before long, he’s criss-crossing the country and enlisting all his friends in the quest to hack the code behind this mysterious place.

“I think the future’s all about loving books and being excited about all the digital stuff. And I think that’s very much in this book; I think it’s a book for people who think books are awesome, but they’re also excited about the Internet and the digital future.”

Since the book was released on October 2, “Mr. Penumbra’s” has been getting a ton of positive press; if you haven’t heard about it already, you’ll almost certainly hear something about it soon enough. And for good reason: The novel’s concept is one of the most fascinating to come along in ages—that is, assuming you’re type of person who’s interested in both reading and the possibilities of all things digital.

I haven’t actually read the book myself—in fact, I haven’t even downloaded the Kindle Sample—so please don’t think of this post as a book review; it certainly isn’t one. What I have read over the past week, though, are probably a dozen different essays, articles and think pieces about “Mr. Penumbra’s,” and because the anticipation and excitement of eventually reading the book is building more for me with each “Mr. Penumbra’s” piece I discover, I wanted to share some of that excitement with you.

First of all, it’s probably worth knowing that Robin Sloan is very much the type of person who’s “excited about the Internet and the digital future;” most recently, he worked as a media manager for Twitter. To get a better sense of his personality, and of the influences that went into the making of his book, check out this brief Q&A conducted by the New York Times’ Nick Bilton, who asks Sloan about his e-book-versus-print-book preference.

Way back when, Sloan was actually trying to raise money for the printing and publishing costs of “Mr. Penumbra’s” on Kickstarter. The well-produced video that accompanied the campaign is definitely worth a look; Sloan was working as a vice president of strategy for Current TV when it was produced.

Incidentally, “Mr. Penumbra’s” started out in life as a short story that was available free on Sloan’s website, and in the Kindle Store. You can still read it (for free) on Sloan’s site, here.

Finally, click the arrow in the SoundCloud file below to listen to Sloan being interviewed about his book on NPR’s Morning Edition.