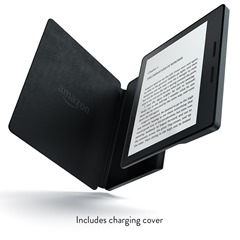 It seems that the embargo on official news of the Kindle Oasis was 9 a.m this morning. The Verge has a detailed story, which beat the official Amazon press release by several minutes.

The biggest surprise is the hefty $290 price tag on the basic WiFi/special offers version of the e-reader. (3G costs $70 more, and disabling the special offers costs $20 more.) Apart from that, it amply confirms what we already knew: the Oasis is a wedge-shaped, reversible, non-waterproof device with physical page-turn buttons and the same 6” 300 DPI screen as the Paperwhite. The device is sold with the leather external battery cover included. It’s available for pre-order today, and will be available April 27.

The Verge makes a big deal of how strange and new the shape is, seemingly unaware that it’s strongly reminiscent of the old Rocket and eBookwise readers. The point of the new design seems to be to move beyond the utilitarian plastic slabs that have characterized all models of the Kindle thus far, and make something sleeker and more desirable to own in and of itself.

But the question is, is it $170 more desirable than the $120 Paperwhite? Is it $90 more desirable than the $200 Voyage? I’m not so sure. Aside from the “wow” factor, what’s the appeal? It has the physical page-turn buttons a lot of people have been asking for, and a lot longer battery life. But it’s not waterproof, there’s no Bluetooth, and apparently Amazon has given up on text-to-speech reading books aloud (in anything that isn’t an LCD tablet or stand-alone speaker, at least) for good and all. Effectively, it’s just another Kindle Voyage—only almost 50% more expensive. (GeekWire has a piece comparing it to the Voyage side-by-side.)

Maybe this is the future of e-ink readers—while the plain utilitarian versions get ever-cheaper, the fancy ones evolve into fancy boutique editions that people buy as luxury goods. I’m sure that this device would feel great in my hands and be frontlit to a fare-thee-well—but I don’t ever see being willing to pay almost $300 for it.