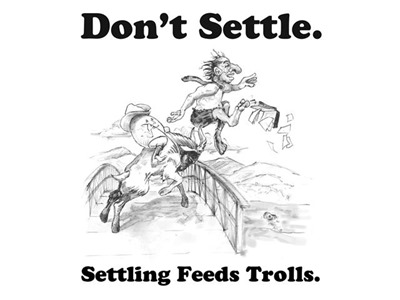 Speaking of Judge Cote, turns out she’s got her head on straight in other ways than just the Apple trial. Ars Technica covers her ruling on a patent troll lawsuit, the first of its kind under a new Supreme Court precedent stating that patent trolls who lose their case can be required to pay the victor’s legal fees.

Judge Cote didn’t give the troll victim, FindTheBest, everything it wanted—she threw out their attempt to file a RICO anti-extortion case against the troll—but she rejected the patent and declared that the legal fee award “will serve as an instrument of justice.” FindTheBest will be appealing the RICO ruling.

The Supreme Court precedent will also be applied to a recent NewEgg patent troll case in which they were not awarded legal fees, giving them another shot at claiming them.