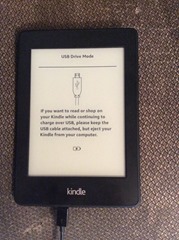 Last time, I went over how to set up your Kindle device or app so that you could email files onto it. While this might be the easiest way for people who don’t want to fuss about with plugs and cables, it’s not at all the easiest way for those who don’t mind plugging things in. Anyone who’s done much copying of files should already be familiar with this process, but sometimes the idea of copying files to a full-fledged device can be more intimidating than simply copying files to a USB thumb drive. So I’m going to go over that way today.

This method will work for AZW, AZW3, TXT, PDF, DRM-free MOBI files, and PRC. If you need to put HTML, DOC, DOCX, JPEG, GIF, PNG, or BMP files on your Kindle, you’ll need to use the email method above, or else convert them with a program like Calibre (which I’ll cover later on). Other e-book formats, such as LIT or EPUB, will require Calibre conversion as well.

Another possible reason you might wish to use the email method instead is that emailed documents show up in the Kindle storage cloud, and can be downloaded to multiple devices and apps from there. They will also keep track of your last known reading position across multiple devices. USB-sideloaded documents will not do that, even if you sideload the same document to multiple devices. If you’re going to be reading your e-book on your tablet, phone, and/or e-ink reader, and switching devices often, you might want to use the email method instead for preference.

But now, let’s talk about sideloading via USB.

First of all, if you’re transferring files from a Mac, be sure to install the free Android File Transfer app—you’ll need that to copy files to an Android device such as the Fire via USB.

When you connect a Kindle or Fire to your computer, your computer recognizes it as a file storage device—just the same as if you plug in a memory stick or external hard drive. So go ahead and wake your Kindle from sleep and do that. As soon as the Kindle notices it’s been connected to a computer, it will pop up a screen telling you it’s now in file-transfer mode, but you can hit “eject” on your computer if you want to read from it while it’s charging. (The Fire screen won’t change, though your computer will notice it’s plugged in.)

Loading files onto the Kindle or Fire is nearly as simple as copying them onto a USB hard drive. If you’re on a Windows box, go to “Computer” or “My Computer” from the Start Menu. One of the drives listed there should be your Kindle or Fire. If using Windows 10, you can simply hit the start button and then click “File Explorer,” then on the left side of the screen, scroll down to “This PC” and underneath it you should see a listing for “Kindle” or “Fire”. Either way, double-click on the device to open its file system.

If you’re on a Mac, your Kindle or Fire will appear on your desktop as a mounted hard drive, and you can double-click on it to open its file system. Look for a folder marked “Documents” if you’re using a Kindle or first-generation Kindle Fire and open that folder. If you’re using a Fire or Fire HD, open “Internal Storage” and then the “Books” folder. That’s where sideloaded e-books need to go.

Once you’ve got that open, open another File Explorer window (if on Windows, press Ctrl + N). If you’re on a Mac, launch the File Transfer app. Then browse to where you’re keeping the file you want to sideload. Then just drag and drop it into the other window. Repeat as necessary with as many files as you want to copy over. When you’re done, remember to eject the Kindle or Fire from your computer before you unplug it.

And that’s that. Next time you start up the Kindle, or launch the “Documents” app on the Fire, your e-books or other documents should be right there. (Remember, for whatever reason, the Fire puts files user-loaded material under the “Documents” app, not the “Ebooks” app.)

In my next installment, I’ll discuss using Calibre to manage e-books on your Kindle.