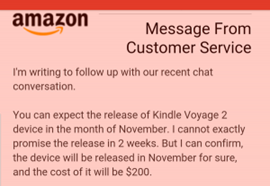 The Kindle Voyage 2’s release is still on track for this month, according to Good E-Reader.

In July, Editor in Chief Michael Kozlowski predicted a November release amid jeers from the many people skeptical of his mixed record on these matters.

But now he is backing up his crystal ball with a partial reproduction of a note that he says Amazon Customer Service is sending out through reps.

“You can expect the release of Kindle Voyage 2 device in the month of November,” the note says. “However, I cannot exactly promise the release in 2 weeks. But I can confirm, the device will be released in November for sure, and the cost of it will be $200.”

No confirmation from U.S. reps

I tried an Amazon rep via a number here in the States. She checked with colleagues, then denied any knowledge of the existence of a Kindle 2. Instead she aggressively kept trying to steer the discussion back to the glories of the original Voyage (photo)—even though I told her I’d already owned one (since sold). Her follow-up e-mail did the same.

So what’s cooking? Via e-mail, Michael told me he thinks that the U.S. reps are under tighter restraints than those oversees. It’s possible.

The U.S. customer rep’s robotic regurgitation of the original Voyage’s features—even when I kept reminding her this is old news— might suggest that Amazon has given American reps a certain script to follow. I don’t know. How much separation is there between the U.S. and overseas support operations? That’s one issue here.

For what it’s worth, Michael’s post adds: “November is also the month that Amazon is expected to announce a new basic Kindle, that will include a higher resolution screen and will be billed as ‘the lightest Kindle ever.’ The company will also release a 5th generation Kindle Paperwhite with 8 GB of memory.” Even when the current Paperwhite was unveiled as recently as June 2015? But then again, if it’s just a memory boost, an upgrade could indeed be a possibility.

There you have it. We report the promising rumors. You decide. This is messy. Like it or not, however, tech is a forward looking business. As a customer I’m far more interested in what’s ahead, even just a possibility, than I am in what has passed even though, yes, I’ll consider track records.

Here’s one significant detail about the Good E-Reader rumors if they’re true. The new Voyage 2 is supposed to have “a new Freescale I.MX 7 1 GHZ dual core processor” fast enough to help blur the distinction between e-readers (slower) and tablets (faster).

If so, does this mean that Amazon could once again get serious about apps for E Ink devices and help revive this sagging category? What about the trickle-downs for future devices cheaper than the Voyage, the top-of-the-line model?

Even if the chip makes a dramatic difference, I won’t bet on this alone rescuing e-readers. But when color e-paper finally gets good enough, who knows?

Meanwhile I’ll reproduce in full Michael’s response to my query:

Hello David. A number of users sent me screenshots from this post I did back in July. You can read some of the comments, I think some of them copied and pasted what their CS reps said.

Most of the CS reps aren’t based in the US that the users talked to, but in the UK, India and other countries. I think the US reps don’t say too much, because the possible backlash from the Seattle HQ.

I know personally one current engineer at LAB126 that tosses me info occasionally and two former people I met on Glassdoor who also know what is on the roadmap. So I only know a few general aspects about the new Kindle Basic and PW5.