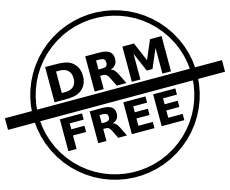 Last year, I made a pledge: that, for 2013, I would put my money where my mouth was on the DRM issue and spend no money on books which were restricted with digital rights management. Why did I make this stand? I think that I had one too many books get lost to stores going out of business, to reader software dropping support for formats which once were commonplace but are no more, to spotty internet service which prevented me from ‘validating’ a book I had paid good money for and so on. If I bought it, I wanted it to be MINE.

Now, to be fair, this didn’t mean I actually didn’t read any books with DRM. I was fine with library rentals—that’s fair because there is no illusion about what it is. It’s a rental, and you know that when you sign it out, so DRM that enforces the time limit is part of that process. My objection was that I didn’t want to pay a full (not rental) price for a book which said ‘buy now’ on it and then be told I couldn’t use it as I wished to. So I limited my DRM exposure to only library borrows, and paid only for books which were DRM-free. And what did I learn from my little experiment?

1) It was a very cheap year for me. In total, I averaged out at about 11 bucks a month, which is my lowest spending year ever. I think that was because I spent some of the year buying from Delphi Classics, who reissues classic titles. Those books were very inexpensive because they were public domain source materials. I also found that some of the more reliable indie authors—Konrath, Crouch et al—have made the affordability of indie titles part of their marketing scheme. Even at the high end, such titles tend to be in the $4-5 range. When you consider that the last few library books I checked out were in the $13-18 range on the Amazon store, you can save a bundle on a similar quantity of books if you can find a reliable indie whose work you like. Crouch, for instance, hit pretty much the same button for me as Dean Koontz did, and I could have his whole library for the cost of five or six Koontz books.

2) I am not a fan of omnibus collections. I thought I was. The complete works of So and So in one handy volume! What I found though was that I inevitably wanted to read only a part of the collection, and I would rather find a good edition of that part than slog through the rest of the omnibus just to get my money’s worth. I also found that the OCD side of me really enjoyed checking off a book as ‘done,’ both from a stats-keeping standpoint and also because I feel like a book that is ‘done’ has also been by definition proof-read, and that means I could share it with my spouse or children without having to vet it first to make sure it was error-free and up to a reasonable standard. Sorry, Delphi Classics! I will be unsubscribing from your email list. If I want to read a book, I would rather just read it and not have to wade through bonus content first.

3) All hail the re-publisher! Some of the best ‘indie’ books I read this year actually weren’t indie books at all. They were re-publications, either of public domain material or of commercially published books for which the author has regained control. This is, I think, a huge growing market and one I will definitely keep an eye on. Some of these are not unknown names, either—Morley Torgov, available at Smashwords for under $5, is a winner of the Stephen Leacock Medal and his books were the basis of a TV show which was popular when I was a kid.

4) I have broadened my horizons. One of my main sources for DRM-free reads this year was Humble Bundle, who typically offers half a dozen books per bundle, with a few extras. I found that both times I took advantage of their infrequent ebook sets (they mostly focus on computer software) there was one book I actually did want, and the rest were bonuses. That meant there were a few books I threw away as absolutely not readable for me, but it also meant there were some wildcards that were maybes. Two of those books were among my favourite reads this year, and one of them has a recently released sequel I plan to buy next year, when my to-read pile shrinks a little.

5) Subscription services are a growth industry. I trialled a for-pay newspaper-owned ebook program this year (Star Dispatches) and two education-themed sites, one of which offers both bundles and standalones (Heritage History) and one of which only offers new releases through its subscription program. These can be a great deal if you like the product. I found that the Star reads I liked were exceptional, but the duds were really duds and I would up discontinuing the service when they started piling up, unread, in my in-box.

6) Finding the needle in the haystack can still be a slog. Yes, the needle is finally getting bigger—success stories like Hugh Howey’s Wool series are giving some new visibility to the indie market. But the haystack is getting bigger too. I found a few vendors I returned to over and over again because I knew what I was getting, and a few others who were either one-shot deals (author websites who only sell that one author’s work) or so large and unfiltered that I simply didn’t go that often.

So, what were my hits of the year? I’ll check in again at month’s end with my Ultimate DRM-Free Reading List. Stay tuned!