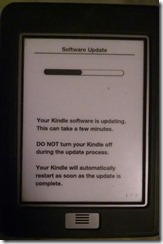 On BoingBoing, Jason Weisberger writes about his experiences updating his Kindle Voyage to the latest firmware version. He had trouble getting USB cables to work to connect his Voyage to his Mac Book Pro to upload the update. He eventually had to reset the Kindle and try it from his Mac Book Air instead, whereupon he got it to work.

The more interesting thing, though, is that his explanation of the update process, and his mention of how fantastic the new Bookerly font was, got me to wondering if my own Kindle Touch was on the latest update itself. A bit of poking through Google brought me to Amazon’s guide to updating software manually for any of its devices.

Sure enough, my Kindle turned out to be running version 5.1.2—not one but two updates behind. I suppose I had assumed that my Kindle would just update itself automatically, like when you buy a new e-book—but whether that was supposed to happen or not, it didn’t.

So, according to the manual update process, I had to download the two .bin files that contained the updates, and then one at a time, copy them over to my Kindle, then go through the menus and tell it to update itself. Well, actually it wasn’t quite that simple. First I had to delete a couple of fairly large books from my Kindle to clear space. (Happily, I was able to do this in Calibre simply by sorting the books by size, finding the biggest ones that showed a check mark in the “Device” column, then right-clicking and picking “Remove books –> Remove matching books from device.”)

Then, the first time I tried installing the update, it didn’t take. I didn’t notice this until I’d tried copying the second updating over and having it simply disappear on me a few times. I tried deleting a few more big books (and honestly, I can’t see why I even tried putting graphic novels on my Kindle in the first place) and copying it and running it again now that it had more space. Again, it seemed to install and update itself properly, but when I checked the device info, it said I was still on version 5.1.2.

Finally, I chose the nuclear option: I reset the Kindle, erasing everything on it and de-registering it, rebooted it, and copied the file over. I didn’t even bother signing it back in to Amazon, just copied and ran the update as soon as it came back up. This time it gave me an “Update Error 006” partway through and rebooted. Poking about with Google suggested the update was corrupted, so I re-downloaded the file, directly onto the Kindle as a plugged-in hard drive this time.

Yep. Still “Error 006.” A quick Google on the answer brought up a web site that recommended making a bootable USB stick and booting your computer into a “kubrick” “Kindle un-bricking” image. That seems like a bit of an extreme measure to go to; I’ll probably try contacting Amazon tech support first, after I sleep again. For now, I feel like I’ve spent too much time on this issue, and I’ll put it aside for later.

Any TeleRead readers have advice to offer?