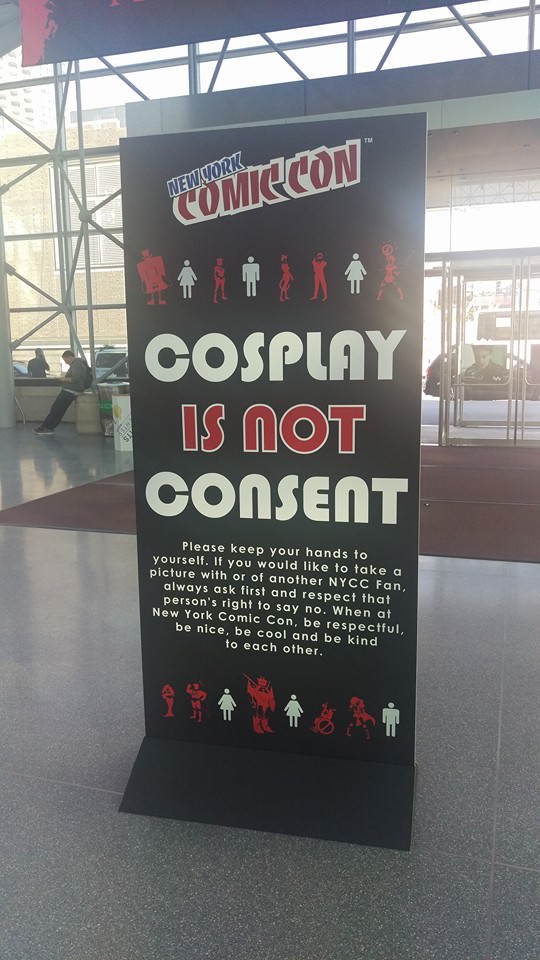 The New York Comic Con, just kicking off at the Javits Center, has given very prominent billing to its anti-harassment policy. As you can see from the billboards snapped at the event.

The NYCC site states in detail that “New York Comic Con has a ZERO TOLERANCE POLICY for harassment of any kind, including but not limited to:” stalking, intimidation, offensive verbal comments, physical assault and/or battery, harassing or non-consensual photography or recording, sustained disruption of Panels, signings, and other events, bathroom policing, inappropriate physical contact, unwelcome physical attention. And it warns,”if a person engages in harassing behavior, New York Comic Con (NYCC) Staff will take prompt action in any form they deem appropriate, including expulsion from NYCC with no refund. Our policy applies to EVERYONE at the convention.” Plus, “Be nice, be cool and respect each other” has got to be one of the most inoffensive, commonsensical policy guides ever issued for a con.

Since we’ve seen, sadly, harassment entrenched at the highest levels of comicdom, this kind of approach is all too necessary. And it’s good to see major cons giving it the prominence it deserves.