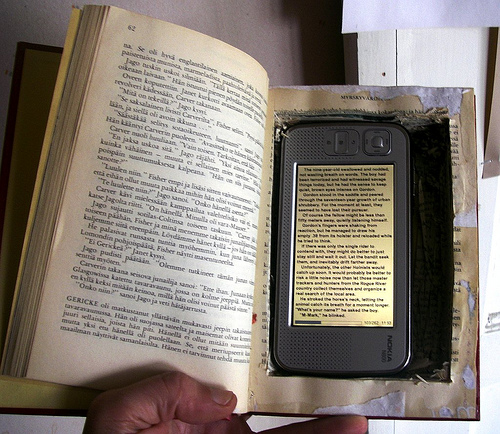 Salon Magazine’s culture editor Anna North recently posted an article about how much she “hates books.” Not the collections of words—she loves reading—but the physical artifacts that have the words in them. She’s moved seven times in eight years, and has gotten tired of hauling dead tree pulp around. She’s come to love her iPad, and the ability to read e-books on it, The books she keeps, she keeps because they hold important memories and associations for her, but most new books she buys digitally.

There’s not a whole lot new in this, of course. Accounts of people joyfully converting to e-books and getting rid of clutter have littered the Internet these last few years. (Such as this one, and this one…) But it’s nice to see another. Kind of appropriate that it’s in Salon, too, given that an article in Salon Magazine is what introduced me to the idea of e-book reading on hand-held devices in the first place.

But the real fun comes in the comments below the article, wherein several people react as if North just confessed to barbecuing puppies. A commenter going by the handle “firstpersoninfinite” writes:

Book culture is not replaceable. Go to any large used book store and look at how many editions and translations of important books there are. Each one feeds upon the qualities of the one before it. Each one recognizes that other viewpoints existed before those they are now expounding upon, and they must recognize this fact. Now look at the publishers of e-books. They pretend that nothing exists except the market forces that put them there. They exist in a vacuum, so to speak, and fail to meet any cultural standards that aren’t themselves capitalistic only. Book culture was  an edifice. E-book culture is a shoe-shine stand with new rags. They will have to earn their way into significance or else culture will fall into whispering conjecture.

As another commenter points out, the e-books are the “exact same book that ‘feeds upon the qualities of the one before it,’” just in a different format. But the interesting thing to me here is that firstpersoninfinite brings up culture of old versus new publishers. 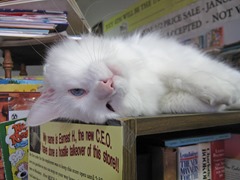 The talk of culture echoes a conversation I had with a friend several weeks ago on the matter of the DoJ/Apple trial, and the publishers versus Amazon. He pointed out that, quite frequently, matters of the old versus new come down to culture clash. When people say they like paper books, the feel of pages, smell of books, and so on, what they are more often saying is that they are in love with the culture of paper books. The musty bookstores where you can go in and spend hours rummaging through the shelves, discuss books with the proprietor, pet the bookstore cat, maybe hold conversations with a bunch of like-minded people in a reading room or around a bookstore café table. These are fond, warm memories for them, and threats to the trappings of that culture are a threat to their egos.

I’ve never been a really big part of that paper bookstore culture. I would shop at bookstores when I could, and kind of liked them, but I never really lived near a bookstore in most of my formative years; our home was out in the country. We only ever got to visit those stores when we went into town, and even then we didn’t have a whole lot of money to spend. I didn’t get to steep in that culture for hours on end, I just got a quick dip in and out.

But the culture I fell in love with was the culture of e-books. The e-book store websites where you can search by price for bargains, by author and title for specific things, and have the book in your reading device almost before you realized you wanted it. The forums, blogs, and chatrooms where I can hold conversations with like-minded people from all over the world. Those are my culture, and I’ve been really mad at the big-six publishers ever since about 1998 for clinging to the old bookstore culture and not supporting my new e-book one as much, and I cheered when Amazon did an end-run around them to open up the e-book market. Others (such as the publishers) were not so sanguine, however.

My friend pointed out that to cast old vs. new strictly in terms of economic advantage—the money that could be saved by shipping electrons vs. paper around, for instance—was missing the point that, for people in love with one culture or another, economic considerations are secondary to the emotional attachment they feel for their culture of choice. Small wonder that firstpersoninfinite compares his book culture to an “edifice” and the new culture to “a shoe-shine stand with new rags.” An e-book fan like me would probably call paper book culture an inefficient lumbering dinosaur, riddled with inefficiency. And of course we’d both be right—from our own points of view.

My friend compared it to small towns having their own post offices. The USPS could probably handle mail more efficiently by shutting down small branches and consolidating in larger centers, and earn some money by selling the unneeded properties—but it’s very important to these small towns for reasons that go beyond monetary to have their own post office, and they would fight tooth and nail any proposal to take them away.

So, next time you witness an e-book vs. print book argument, remember that all that kerfuffle over “smell of books” is really just a mask for a culture clash of old vs. new, and people aren’t necessarily going to be totally rational when something so important to their own ego is at risk. Will we lose something when and of the old paper bookstore culture dies out? Almost certainly. But then, we lose old things and gain new things all the time. That’s just how progress works.