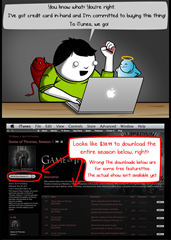 That The Oatmeal strip I mentioned a few days ago has stirred up some controversy. A post on TechDirt links to both a rebuttal from Andy Ihnatko decrying the culture of entitlement that leads to people thinking they have a right to download content just because they can’t buy it, and a post by Instapaper’s Marco Ament that takes a more pragmatic stance.

Ament uses the example of a public restroom where people kept throwing wadded up paper towels on the floor by the door because they wanted to use them to avoid touching the restroom door handle and there was no wastebasket nearby. The management kept putting up signs telling people to use the wastebasket, and people threw even more paper towels on the floor in response. They apparently never thought of putting another wastebasket in a convenient position near the door.

He compares this to the content industry’s constant scolding of pirates rather than doing the pragmatic thing and making their services more attractive to the sort of people likely to pirate.

We often try to fight problems by yelling at them instead of accepting the reality of what people do, from controversial national legislation to passive-aggressive office signs. Such efforts usually fail, often with a lot of collateral damage, much like Prohibition and the ongoing “war” on “drugs”….

Relying solely on yelling about what’s right isn’t a pragmatic approach for the media industry to take. And it’s not working. It’s unrealistic and naive to expect everyone to do the “right” thing when the alternative is so much easier, faster, cheaper, and better for so many of them.

Taking the point even further, there’s a simple fact of today’s world, which is that consumers have power. Ihnatko’s entire point seems to assume that this consumer power is "entitlement." I tend to think of it as consumers making their will known — and that tends to lead to better products that should make everyone better off. What Ihnatko ignores is that a market is not determined by just one side. It’s the interplay between buyers and sellers, and if the buyers aren’t happy, they express that to the sellers in certain ways — and infringement is one of those ways. It’s a market signalling method. I’d argue that it’s just as much an "entitlement" mentality by the "sellers" to pretend that only they get to decide what the consumer should be able to get, without listening to what the consumer wants.

I was discussing this with some friends online this morning, and they raised a number of interesting points. It is true that piracy has often been a driver in getting us better products. For example, if it hadn’t been for Napster, we wouldn’t have gotten iTunes—and by making music easier, faster, and more trustworthy to buy than to pirate, Steve Jobs demonstrated conclusively that it was possible to compete with free. In fact, some studies suggest that music piracy has declined considerably since Apple and Amazon got in the music game.

One of my friends pointed out that there are other ways of protesting corporate policies that we don’t like—not buying something or organizing a boycott are taking a moral stance, but just ripping off the stuff you want is giving up any claim to a moral stance. But the problem is, it’s all very well to protest in a moral way, but it usually doesn’t get you much attention.

Zillions of people have boycotted Amazon for one reason or another (including me, at one point), but it just keeps chugging along. The people who try to make May 15th “Buy No Gas Day” or try to turn Black Friday into “Buy Nothing Day” are considered kooks and laughing-stocks. People don’t notice or care about boycotts, and only in very rare situations involving tiny specialty markets (such as the Elsevier thing I mentioned yesterday) can boycotts be effective.

Almost any sort of broad consumer boycott tends to get lost in the noise of the people who don’t buy for other reasons and the zillions of people who do buy anyway. And it also ends up being the same sort of “slacktivism” as e-petition drives—ways people can feel like they’re “doing something” by not actually doing anything at all. And even if it did end up being effective, it might send the wrong message: if a non-e-book-available print book sells poorly, is it because people are waiting for the electronic version, or because they just don’t want the book at all? How do you tell the difference?

But people notice when you pirate. Aside from the music and iTunes example, rampant video game piracy got us things like Valve’s Steam. (Of course, it also got psychotic ultra-tight DRM from publishers like Ubisoft that you practically have to pirate to be able to play at all, so the pendulum swings both ways there.) They may not like that you’re doing it, but it’s certainly visible in a way that boycotts aren’t. And it shows there is demand for a particular product in a particular format.

And yes, it ends up getting the pirate free stuff. And many pirates might never have been willing to pay for the stuff if it had been available. But as The Oatmeal indicated, at least some would have. And that’s money the media producers—be it film studios who window their movies, or publishers who make their books available only in certain parts of the world—are leaving on the table.

It’s possible to take steps to meet pirate demand without implying pirates are right in what they do. I covered both Litres.ru and Valve doing something to that effect in Russia a while back. So why don’t content publishers do this more often? At least some of them are already treating piracy stats as market research. Perhaps they should pay more attention.