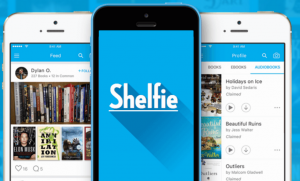 Peter Hudson, co-founder and CEO of BitLit Media, now known as Shelfie, has grown his startup book bundling firm significantly since I spoke with him last, in December of 2014.

In this week’s Kindle Chronicles interview, Hudson said the number of publishers participating in Shelfie’s innovative pairing of purchased print books with discounted or free digital versions has risen to more than 1,400 compared with 220 just a year and a half ago. That includes three of the Big Five Publishers—Macmillan, HarperCollins and Hachette.

The number of eBook titles buyable through Shelfie has risen from 80,000 to more than 400,000. That would cover a quarter of the books on an average reader’s personal bookshelves.

I love Shelfie’s procedure of finding the eBooks I can get based on the physical books I own. You download a free Shelfie app to your iOS or Android device, and you use the app to take a photo of a row of your books. That’s called, you guessed it, “a shelfie”—thus the new name for the company.

The Shelfie app then figures out how many of your books are available as free or discounted eBooks from the publisher. A couple of clicks are all it takes to purchase the eBook. Et voila: you are a hybrid book reader, able to shift between print and digital versions of your book.

Depending on your eReader, things might not be that simple, though. Not all of the Shelfie eBooks are available in .mobi format, so you need to check that detail in order to read the eBook easily on your Kindle device or app. From my browsing of the platform, it seems as if ePub with Adobe DRM is the preferred format, but many books have both, as well as PDF.

I confess that I have my doubts about this hybrid book thing, because I have purchased and read only about three print books in the past seven years. But Peter assured me that lots of people like to switch back and forth, and his business growth seems to indicate he’s not hallucinating on this point.

Also in this week’s episode, I take a look at a fascinating speech Amazon founder and CEO Jeff Bezos gave before the Association of American Publishers way back in 1999 .

Young Bezos, whose name was mispronounced by the AAP introducer—it’s BAY zohss, not BEE zohss, people—talked about being obsessed with customers, not competitors, so he was singing the same song as always.

What I loved is seeing how uncertain his delivery was and how disarming his enthusiasm was for the ride then just four years past the online launch of Amazon.com. He also seemed to receive a friendly, sort of indulgent reception from the publishers’ group. I wonder how many had any clue that 17 years later this goofy, gee-whiz Internet savant was going to completely upend their industry.

Next week I will finish my coverage of BookExpo America with more interviews from the floor of the exhibits hall. For episode 402 on June 25 my guest will be Jane Friedman, the legendary and savvy publishing pioneer who left her job as CEO of HarperCollins in 2010 to found the all-digital Open Road Integrated Media, where she is now chairman.