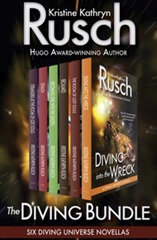 Storybundle is back with an interesting set of bundles. The main one that caught my notice was the “Women in Sci-Fi” bundle, which I saw mentioned on Mike Glyer’s “File 770” blog. Curated by Kristine Kathryn Rusch and featuring a number of her works, this collection features a remarkable number of titles by a number of recognizable names—including Rusch, Cat Rambo, Catherine Asaro, and Jody Lynn Nye, among others. It also features an anthology co-edited by folk singer Janis Ian and writer Mike Resnick.

I’ve had strong recommendations for several of the stories in this set from friends whose literary tastes I trust pretty well. It seems like a really good set of works for the money. I might just have to pick it up.

But the other two sets of works on Storybundle’s slate right now are just as interesting. There’s a digital comics bundle called “Dynamite Pulps,” featuring some fairly well-known names both of characters (The Shadow, Doc Savage, Zorro, etc.) and of creators (Garth Ennis, Alex Ross, etc.). And there’s an “Indie Superhero” bundle with works by Mur Lafferty and a number of others.

The “Women in Sci-Fi” and “Dynamite Pulps” bundles are available for another three weeks, and the “Indie Superhero” bundle is available for another two. All three titles have two tiers—a pay-what-you-feel-like basic level of 4 or 5 titles, plus a bonus tier of the same amount that requires paying at least $12 (for “Indie Heroes”) or $15 (for the other two) to unlock. All titles are DRM-free.

It’s also worth noting that the Humble Bundle has an e-book bundle—but then, it always does, these days; a different one each week. The current one is themed around music, including a couple of collaborations between Neal Peart of Rush and Kevin J. Anderson and the first three volumes of Scott Pilgrim. Like the Storybundle sets, it has basic and bonus tiers.

It’s an embarrassment of riches, to be sure. Even if you only paid a penny each, you’d still get a quite decent chunk of works in the basic tiers of each bundle. And the bonus levels are quite reasonably priced for what you get. Enjoy!