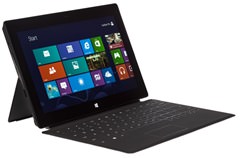 Neurogadget has what looks at first like an interesting article—it sits down to compare a Microsoft Surface Pro 3 to “one of [its] biggest rivals,” an Acer Aspire S7 laptop. And the article starts out well enough. It talks about Microsoft wanting to bring “more than a tablet” to the market, and hence making a hybrid tablet that ran a variant of the desktop version of Windows, with an attachable keyboard cover.

The article goes through the specs, comparing their design, displays, hardware, and prices—fairly thoroughly, in fact—but then just…fizzles. It gives all the specs, but with no opinions or recommendations afterward. It’s like the writer didn’t even have an opinion, so just figured he’d say as much as he could about each device and that was enough.

The two devices are more or less comparable, so it doesn’t seem like there’s that much of a benefit from picking one or the other apart from whether its given form factor would be more useful to you—but the article doesn’t even say that much. It just plunks down the specs for each one and then ends, leaving the reader wondering if there’s a “next page” button somewhere that he missed.

Personally, I would rather like to have a good Windows tablet, but the one such tablet I tried just wasn’t all that great. Maybe I’ll try again sometime when I have more money. Meanwhile, as for whether to get the Surface Pro or the Aspire S7, it’s as I already said: as best I can tell from this article, it seems like they’re about the same, so pick whichever one best fits your usage style.

And honestly, that might be enough of a point for an article like this: we’ve reached the point where tablets and laptops are effectively interchangeable. Who would have predicted that ever happening before Apple changed everything with the iPad?