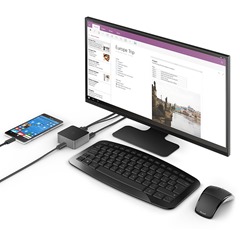 On Recode, tech analyst Tim Bajarin discusses a vision he had in 1989 for a “computing brick.” Tired of lugging around heavy laptops, he imagined a component containing a CPU and storage that you’d carry in your pocket and connect to screens and keyboards wherever you went. Now, he thinks, we’re almost there:

But imagine if a smartphone or a pocket computer could serve in the role of being your own personal computer that has a CPU, OS, storage and the necessary wireless technology to display what it sees on any screen it comes in contact with. Using touch and voice for input and navigation, there would be no need for a keyboard at each screen as I originally envisioned. That would mean that any smart screen can become your personal computing display.

In fact, some smartphones can almost do this already. My brother’s Lumia can dock with a keyboard and screen to act as a full-sized Windows computer (though it can’t run the same versions of software as a true desktop, and its versions include some limitations). And you can also use gizmos like the Chromecast to project your tablet or phone display across a full-sized TV screen. But with the Internet of Things on the horizon, Bajarin imagines this capability coming to all consumer mobile devices and TVs that go with them.

It’s an intriguing idea, not least of all for what it would mean for e-reading. We’ve already noted that Chromecast screen mirroring can turn your TV into a big-screen e-book display. But if you could do that with any device and any screen, screen reading could become even simpler and more attractive. Rather than read from a tiny screen, you could project e-books onto whatever bigger screen happens to be wherever you are. You could start reading a book on your TV at home, switch to your phone to continue it while traveling, then project it onto the TV in your hotel room without batting an eye.

The tech for this is probably just a few years away, and wider adoption a few years beyond that. Still, it would be interesting if it came to pass, wouldn’t it?