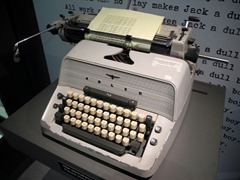 For years I’ve wanted to take part in NaNoWriMo. I may even have attempted it once several years ago. But this year, I’m actually going to do it – and refused to start writing this post before I finished my first day’s worth of words.

I chose this year especially because I have so much going on, more than I’ve ever had before. If I can’t write now, then I never will be able to do it.

Here’s a perfect example: On the second day of NaNoWriMo, I had an off-site meeting, had another appointment 20 blocks away (in New York City), drove home in rush-hour traffic, made dinner, rested my head just for a second – which turned into eight hours later –  then had to start my day all over again.

So this leads my first tip for NaNoWriMo.

You better find free moments, and there may be more of it than you realize. I utilized my train ride into work to write this morning. I did it on my smartphone using Google Drive, tapping away with my thumbs ignoring the crowd squeezing in and giving my arms barely any room to move around. But I’ve always been good at blocking out the noise. This goes back to my days as a newspaper reporter when I have to write a story on deadline with 50,000 screaming fans in a baseball stadium.

By the end of my nearly hour train ride, I had 1,200 words done all by 8 a.m. Five hundred more words to reach my daily goal would be a breeze.

NaNoWriMo is not easy for someone with a lot going on, but I’ve known people who have more going on in their lives than I do and manage to get it done.

Is any one else taking part in NaNoWriMo this year? How has your first couple of days been?