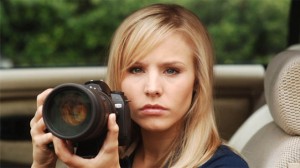 The Veronica Mars Kickstarted movie is set to make its big-screen debut on 270 screens across the United States next month—and when it does, it will be available for on-line digital purchase and rental at the same time. This is unprecedented for a movie from one of Hollywood’s six major studios; most such films are heavily windowed with no rental or purchase possible until the movie has passed out of first-run and second-run theaters.

This is made possible in part by the movie’s low-budget nature; the movie was mostly funded by a Kickstarter that raised $5.7 million. Although some of that money went toward T-shirts and other rewards for contributors to the Kickstarter project, most of it went into the movie, along with some money from Warner. In the end, the movie only cost a little over $6 million—practically independent filmmaking by today’s budgetary standards.

Ordinarily, the contracts movie studios have with theaters require at least a 90-day window between release in the theater and on home video; however, Warner is getting around that by renting the 270 screens (260 from AMC, 10 independent). Usually theaters and the studio split the proceeds of ticket sales, but in this case AMC is getting its money up front and Warner will take the entire proceeds of the movie.

Needless to say, this will probably be watched very closely by movie and television execs. Will the movie bomb, or will it take off? To what extent will its profitability be influenced by its simultaneous release on home video? Will movie studios try something like this again? Given that plenty of folks have been agitating for the end of windowing for some time, it will be interesting to see whether eschewing windowing on this title will make it work. (Wonder if something like that could have saved Serenity?)

Warner execs say the movie will be considered a success even if only the established Veronica Mars fanbase attends. Don’t expect to see a tentpole picture like Man of Steel II released under this strategy, but the execs say Warner will be looking at other properties from their library to see what else might qualify for a low-budget simultaneous-release fanbase-pleasing movie.

Veronica Mars was recently added to the Kindle Worlds licensed-fanfic program, and last year the movie also led to the announcement of new novels in the series.